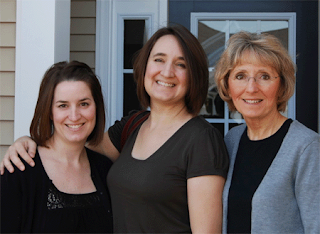 I'm back from Fort Mill, South Carolina, and the retirement community my folks have moved to. My dad is still working, but my mom is loving golfing, playing bridge, learning paddle ball, and hanging out with friends, old and new. My sister was able to meet me for the trip, and we had a great time shopping at Ikea and the Prime Outlets Mall (we did some damage!) and eating at various delicious restaurants, usually outside in the sunshine. (I am not ashamed to say that I came home with four loaves of Panera bread in my carry-on.) 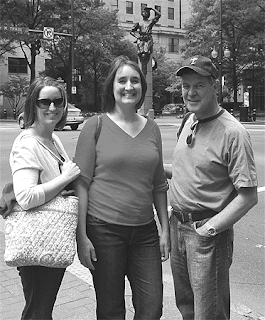 The above picture was taken in downtown Charlotte. We took the commuter train in for $3.00 round-trip. Since the business people of Charlotte are home on Saturdays, that's a perfect day for tourist-y type stuff, and it's a lovely city. My mom walked around holding her camera, stopping periodically to take pictures of trees, and statues, and buildings. She looked quite the wide-eyed tourist, and my dad stopped me and said, "She wouldn't last five minutes in New York City." (My dad is from northern New Jersey.) "The police would call us and say, 'We can't find her; she just disappeared.'" "Yeah," I said. "They'd say, 'All we found was a flip flop and a lens cap.'" We chuckled, but she did get some pretty pictures. If we seem especially sparkle-eyed in this picture, it's because, once again, mom counted to three to take our picture, but then realized she had the lens cap on. 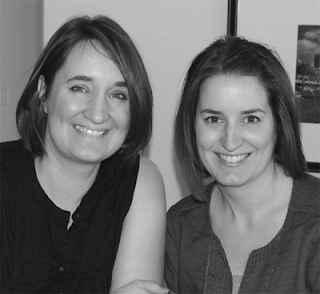 My sister had been especially excited about Ikea, and her husband is probably thankful they don't live near one. If you've never been to one, it's a Swedish housewares store that sells everything from kitchen wares, to sofas, to kids' toys, to meatballs. And everything is cheap. We walked in, and Laura immediately began shouting out prices. "Look at this! It's only $1.99!" "And look at this! It's only $2.49!" "Just so you know," she finally said, "I'm going to shout prices the entire time we're here." I joined in, of course. Because hey, where are you going to find the cutest cupcake paper liners in fuchsia and black for only 99 cents? And a six-pack of Scandinavian printed glasses for only $5.99? 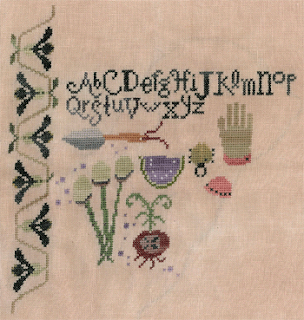 I don't know why I always think I'm going to get a ton of stitching done on my trips. But I promise to be diligent this week and get my Magic Garden Sampler done. I'm going to order a frame today, and hopefully will be able to release in about two weeks. It's turning out super-cool, and I love the black flower border on the left hand side. It was semi-inspired by Alice in Wonderland. I think the purple-fleshed watermelon slice is neat-o. It's on 40 count Lakeside Linens Vintage Light Exemplar linen in Sampler Threads. 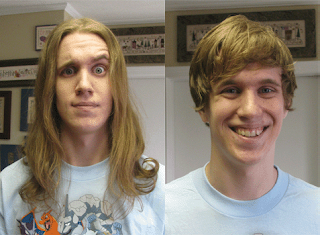 I had a bit of a shock yesterday. My son, Harrison, came in at 10 to help me pack orders until his dentist appointment at three. At about 11, he said he had made the decision to cut his hair. Now, his hair, originally, was a bit of a difficult topic for me. He wanted to start growing it out in eighth grade, but I made him wait until his sophomore year in high school. And he's been wearing it in a ponytail since his junior year. He has gorgeous wavy hair, but wanted to be a rocker, and in high school, he ended up being "that guy with the long hair."
On Monday, after a heart-to-heart with his roommate and good bud, Davis, they decided that he had done his "long hair time," and now was the time to spruce up a bit for the ladies. I called over to the Aveda Salon just about two hundred yards from my shop, and they had an opening at noon. Harrison gulped, and said, "All right, let's do it." The stylist was nice enough to keep Harrison faced away from the mirror during the hair cut, so he didn't have to watch his locks being taken, one-by-one. ("There was a big pile of hair at the end," he told me.) I've included before and after shots. I'm sure you'll agree that he's quite a looker. He was absolutely thrilled, and he kept popping into the bathroom to look at his new do in the mirror. Then announced that he needed some new clothes, too. (sigh). Teenagers!
Posted by Theresa at 8:57 AM 15 comments:

A new pattern and a kitten name update 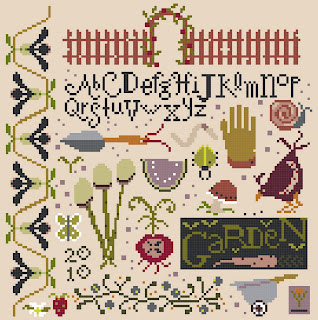 Here's a new sampler I've been working on stitching this week. I need a few more days to get 'er done, but it's turning out REALLY cool. It was inspired by the Alice in Wonderland movie, sort of. The colors are gorgeous, and I'll post a picture of the stitched piece when it's finished. I'm calling it "The Magic Garden Sampler." I hope you like it. It will be released sometime in the next few weeks.
And I have a kitten name update -- Steve decided yesterday morning that our new little kitten is "Ruby." It suits her so well. She's very affectionate and playful, and so brave and friendly. Thanks to everyone for name suggestions. What a community effort!
The weather here has been gorgeous. Steve, Graham and I went to the Hattiesburg Zoo yesterday (the MOST fun you can have for $2.00, I declare.) It's not a huge zoo, but it's got lots of pretty foliage, and some neat animals. The most amazing thing was the alligator pond. It was FULL of tadpoles just getting ready to start growing their legs to become frogs. They were about the size of golf balls, and there were probably a few hundred of them. We also got to hear the Kookaburra, and just to show how universally-understood that little bird is, the little three-year-old boy next to us said, "Mom, he's laughing!" Laugh, Kookaburra, laugh!
Posted by Theresa at 10:39 AM 12 comments:

My husband fell in love with someone younger, cuter and hairier 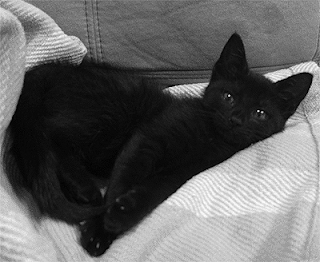 It was bound to happen. We've turned 40, and Steve hit his mid-life crisis and found himself someone new. We went volunteering the other night, and there was a litter of five kittens. Graham and I played with the kittens, the other cats, and Steve just kept holding on to this little one while she licked his arm and then curled up and fell asleep.
And then we put all the cats away, and there Steve sat with this cat on his lap for another half an hour, a goofy, blissed-out expression on his face. "Take her home, Dad," Graham said. "I don't care," I said. Steve thought, and thought, and thought.
See, he has wanted a black cat since we got our first one (Kitty) for Graham. And then I brought home the infamous thread thief, Boo. And Steve would always stop and look at the black cats in the pet store and say how he got to pick out the next cat.
"They're a lot of responsibility," he said.
"We have a big house and plenty of time. Harrison moved out, and Graham's not far behind."
"We already have two cats," he said.
"She's teenie," I said. "She hardly counts as a full cat -- she's more like half a cat."
"They live a long time," he said.
"If you don't get this cat now, you're going to regret it, and it'll be a long time until we're down to one cat again."
"Come on, Dad," said Graham.
Steve was quiet. Quiet. Quiet. Then he said: I say, "Yes."
And we took her home. And she's wonderful, and sweet, and funny, and she comes when you call for her. And the other cats are starting to tolerate her already. She's got the prettiest teal-colored eyes, and her little toenails look like rice grains against her black feet, and she's quick to purr, and slow to hiss. She probably weighs less than two pounds right now (my hand will go almost all the way around her midsection). And no accidents so far (alleluia!!!) She's perfect, and we love her already.
But what to name her...? Ideas?
Posted by Theresa at 9:56 AM 35 comments: