Nashville is this weekend -- no, I'm not going.  Can I tell you how much I am glad not to be going?  I will totally miss seeing all of my industry buddies, but with the tornado here two weeks ago, and some changes going on at Southern Pines Animal Shelter, and two kittens to foster, I've been running myself ragged helping out hither and thither.

I do have one release for this weekend.  More is on the way.  Rather than release it all at once, I'm going to do so slowly.  It's much less stress on me.  And in that theme, let me present my new piece, "Let There Be Peace."

It's stitched on 32 count Natural Belfast linen with a limited edition pack of The Gentle Art Sampler Threads that will be available at market this weekend (or by order, if there are packs left.)  I used a few specialty stitches, but the entire thing can be stitched in regular cross stitch, too.  I think it's a nice sentiment.

I had to put down two kittens in the last week and a half -- terrible stomach bug, and trust me, you do not want to know the details.  Poor dearies.  I've still got two, though, and they are doing well -- getting big and fat, shiny black coats, scampering feet and beautiful little whiskered faces.  Will post pictures soon.
Posted by Theresa at 2:49 PM 6 comments: 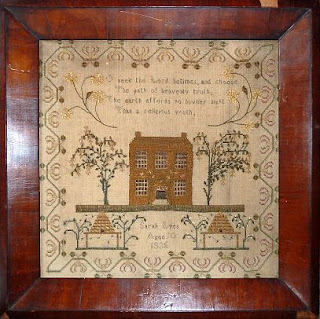 I have worked in the past with this nice gentleman who sells antique samplers.  He has his own place on the web now at www.chris-yeo.com/.  Above is one of the samplers up for sale.  If you contact him, tell him I sent you!

One of my New Year's Resolutions that is now in its second (third?) year is to get the shop organized and cleaned out.  My friend Jennifer has been helping me with that, and things are looking great.  Yesterday I was cleaning through some old photo files on my desktop.  I found a few gems to share...for me, they are reminders of things to be thankful for during a week here in Hattiesburg when so many people lost so much. 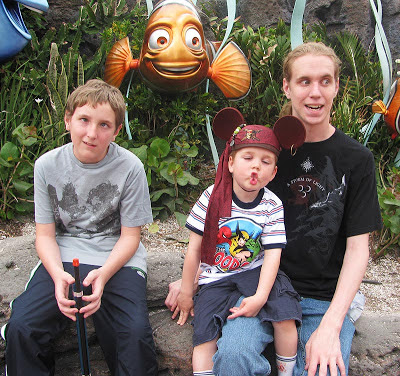 Several years ago, my mom and dad footed the bill for a trip to Disney World with my family and my sister's family.  Mom loves posed and pretty pictures.  I take those, too, but I always love the chance to let people be goofy.  I told the boys (Graham, Henry, Harrison) to give me some fish faces.  Harrison is mimicking Nemo's dad there in the middle. 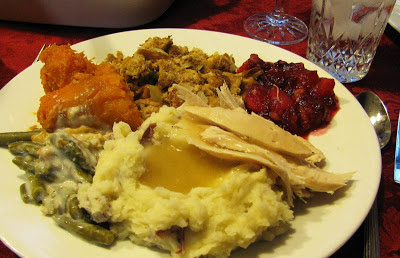 What is it about Thanksgiving?  It's such a great day -- the only thing that needs to be done is meal preparation (which I think is one of the easiest meals to put together for such a large group).  Then eat and enjoy.  Every year, Steve's family comes down from up north to celebrate.  I make everything from scratch (pies, cranberry sauce, the whole nine yards.)  We sip on Whiskey Sours and eat veggies and homemade dill dip while the food cooks.  We watch the Macy's parade, take a nap at some point, spend some time outside.  There's such a feeling of happiness sitting down to that table with people we love.  We all go around and say what we're thankful for. 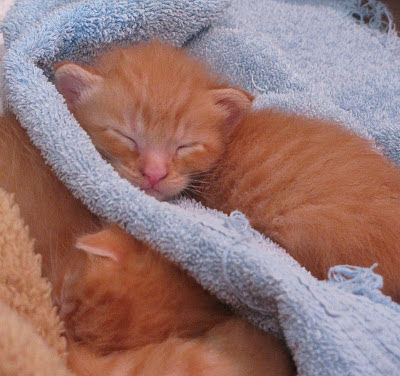 I found this picture of Lucky, Dusty and Ned, the first little group of kittens we took in back in March of 2011.  We're probably got about 100 fosters in under our belt already.  February is a lull -- no kittens now, but soon.  I keep pictures of my fosters near me and wonder how they're all doing.  These little guys were so sweet, and we were continually amazed by them...how quickly they developed, how much they learned, how fast they grew.  This was the batch we learned on, and I won't forget them.

I will be in and out of the shop this week.  A group of us from the shelter is organizing pet food distribution to a lower-income part of town that was particularly hard-hit.  We also want to go door to door to check on pets.  If there are pets missing, we'll take reports.  Many helping hands are making lighter work of a very big task.  It will be a long time until the city is put back together.

Whoop, I have to go -- just got a call that a dog needs to be rescued.  Wish us all luck here in Hattiesburg!
Posted by Theresa at 10:24 AM 3 comments:

Don't worry, we are all right 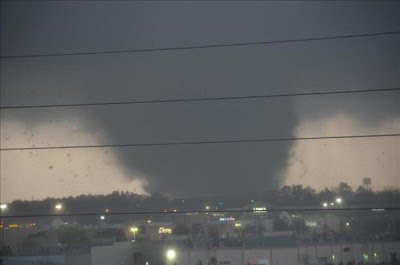 Last night, Hattiesburg was struck by an F4 tornado.  This picture was taken just a few blocks or so from my shop (my shop is located outside the frame to the right -- Lowes is about two blocks down the street from me.  You can see Lowes' sign behind one of the wires.)  No one was killed, and all of the injured so far are "walking wounded," meaning there were no grave injuries.

I finally just made it into the shop to make sure the roof/windows were secure, and the store is in perfect shape.  Harrison did make it to work today at the animal shelter, and all of the animals and the shelter structures are fine, although that was a narrow miss, too.

Much of town is a disaster -- several hundred homes are destroyed, six buildings on USM's campus suffered significant damage, and several of those will need to be razed, our Red Cross building was destroyed, and numerous other businesses/churches have damage ranging from minor to complete.

We were at home when the storm struck -- we have a weather radio and had listened to storm watches, then warnings, and then a tornado sighting.  None of those warnings are strange -- we get them all of the time.  The tornado started on US 589, which is the front of our neighborhood and ripped its way through town.  We experienced a sudden pressure change and strong winds; we lost several large tree limbs and a section of our fence and ended up with an 8-foot long piece of twisted metal gutter from a house in our yard.  Nobody in our neighborhood has gutters, so the storm must have dropped it there from somewhere else.

Many volunteers have converged on town and are helping with the clean up and recovery.  We do have local shelters for people who have been displaced or who are without power.  Thank you everyone for your e-mails and concern.  I will be in the office as usual this week, I hope.  If you'd like to help an organization close to my heart, Southern Pines Animal Shelter is currently taking in all stray animals and waiving surrender fees to help animals that have been displaced by the storm.  The shelter is also having to do rescue work in finding trapped and lost animals.  Click on this link to go to the SPAS web site.  There is a donate button that makes it easy to give a few dollars.  It all helps!

We are definitely counting our blessings, and one of mine is having wonderful friends like y'all! 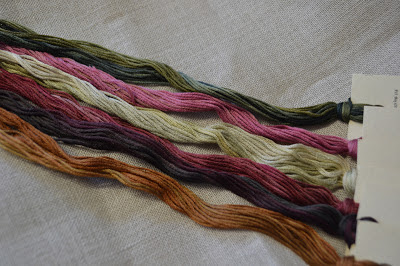 Also, make sure to visit my new eBay store.  I have used eBay for over ten years now to clear out excess/old inventory, but now I'm listing things as "Buy It Now" to make shopping easier for you.  Lots of one-of-a-kind items, old things, new things, fancy things....  Bid on a few, buy a few.  You never know what you're going to find.  (Above is Backyard Blooms Sampler Threads DISCONTINUED limited edition thread set...up for auction now at my eBay store.) 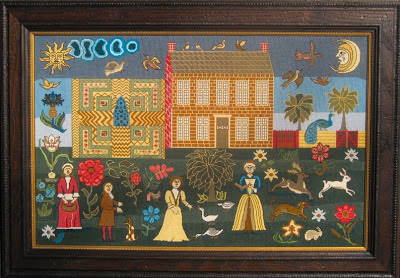 I just received a big ole box of charts from The Scarlet Letter.  I am working on getting those added to my web site, but above you'll see the newest in the line: The Manifesto.  IT IS AMAZING!  How can you not love the heck out of this one?  Anyone brave enough to try it?  Chart is $42.00 and available now.

This weekend I hope to finish up charting my new reproduction sampler, so my model stitcher can get started.  I'm also working on designing a new sampler that will use a limited edition threads set available soon from The Gentle Art... "Let There Be Peace on Earth."
Posted by Theresa at 10:33 AM 1 comment: