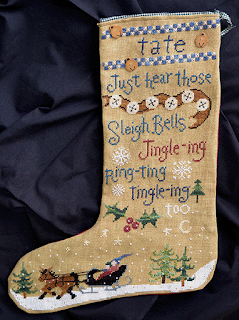 This is late in getting done, but it's done, and that's the main thing. This is Tate's Stocking by Raise the Roof Designs (which is ME!) I designed and stitched this for my nephew, Tate, and I told him on the phone the other day that Santa was going to be able to fit LOTS of presents in this stocking. The pattern is $9.00 and available now. I stitched on 20 count Straw Linen by Weeks Dye Works in a combination of Perle Cottons by Weeks Dye Works and Crescent Colours. A few sleigh bell buttons by JABCo. finish 'er off. What-d'-ya-think? 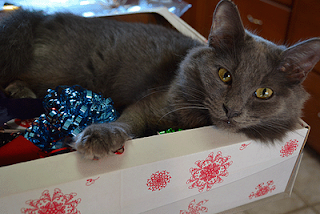 "If you're wanting to buy me a cashmere sweater, which I assume you ARE, I usually take a medium. But the holidays are simply murder on my figure. Better get a large. And would it kill you to get matching socks?" -- Zero
Posted by Theresa at 1:52 PM 18 comments:

News about "A Wassailing"

Good news for you guys this morning -- I am going to be getting/making enough kits to fill ALL my folks on the waiting list for the limited edition "A Wassailing" kit I designed for the Christmas at Williamsburg event. And, I'll even have some extra ones! So, if you want to get a kit or two, let me know -- I will be filling all of these orders on a first-come/first-served basis, and at some point, I will run out.
Posted by Theresa at 11:01 AM 8 comments:

I had to have little Kringle (our newest foster that the shelter named "Frog Bean") put to sleep yesterday.
He did great at our house for the first two days, and then he quit eating. I tried switching him to homemade kitten formula, but he didn't like that either, and threw up everything I could get in him. Thursday night I took him to the emergency vet, where they gave him subcutaneous fluids (he was dehydrated). He spent all day Friday, and the first few hours of Saturday at the vet. We tried various medicines, subcutaneous fluids, tube feeding, heat lamps, but all to no avail.
Yesterday at 11:30, the vet was going over other things we could try (an IV port where I could continue to administer fluids over the weekend, barium to soak up any toxins, a new antibiotic). I looked at little Kringle, limp in one of the vet tech's hands, and asked what kind of a chance he had. "I have seen kittens pull out of something like this," Dr. Kristen said, but I could tell by the tone of her voice that this was a long-shot. In just a few hours on Saturday, Kringle had gone from running and climbing to a wisp of a kitten, barely hanging on. I said that I thought we had done our best, but that if two days at the vet couldn't get him on the mend, he was suffering, and not likely to survive. I did not want him to be in any more pain, and gave them the go ahead to put him to sleep.
His little veins were so small, their smallest needle could not fit inside (he only weighed 12 ounces.) They ended up having to directly inject his tiny heart, but the end was quick. Kringle will be spending his first Christmas in kitten heaven, along with his brother (who died at the shelter on Friday with similar symptoms.) His other two litter mates are becoming sick as well and may not have much time. But they were all surrounded by love and affection for one week of their short lives.
Little furry friends can make such a difference in someone's day. Please support your local shelter and remember to have your pets spayed and neutered.
God bless.
Posted by Theresa at 10:16 AM 23 comments:

Have yourself a meow-y little Christmas... 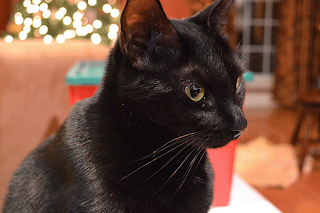 Let your heart be light.
From now on our troubles will be out of sight. 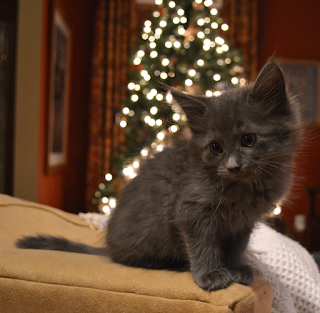 Have yourself a merry little Christmas
Make the yuletide gay
From now on our troubles will be miles away. 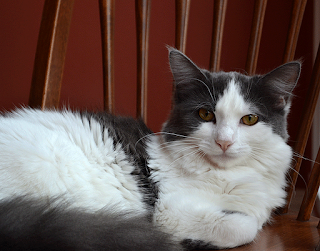 Here we are as in olden days,
Happy golden days of yore
Faithful friends who are...

Cleaning Day and a New Kitten

It had to be done. Yesterday, I spent a good chunk of the day cleaning through my needlework things at home. When I'm designing and stitching, I'm pulling threads, and then, well, they end up in big piles, little piles, under things, behind things...and it's just a mess. And the same goes for fabric samples and embellishments.
And then of course there are my own UFO's, the kids' Christmas ornaments for this year, gifts for stitching friends, and the projects I'm working on "just because." Ridiculous!
So, with many helpful paws yesterday, I sorted through everything, put threads in their proper places, and neatly folded fabrics and put them away. I have maybe a dozen things yet to tuck here and there, and then, VOILA! It'll all be ready for me to tear apart again.
Pekoe is having his surgery this morning. He got his microchip and the last of his booster shots yesterday. We will miss him. But...there's a new furry face at our house now...his shelter-given name is "Frog Bean." Yep. That's his name. Well, we will not be calling him that. I'm thinking of "Gimli," after the robust dwarf from The Lord of the Rings (who charges in with his axe and his beard and his general sassiness.) This little cat is soft, loud, and very affectionate.
Here he is! 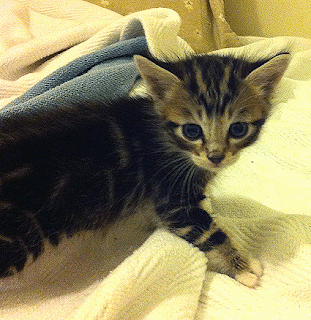