Kitten season always starts around Easter, but of course, there are always a few who make it into our care early.  We've already got one success story this year: 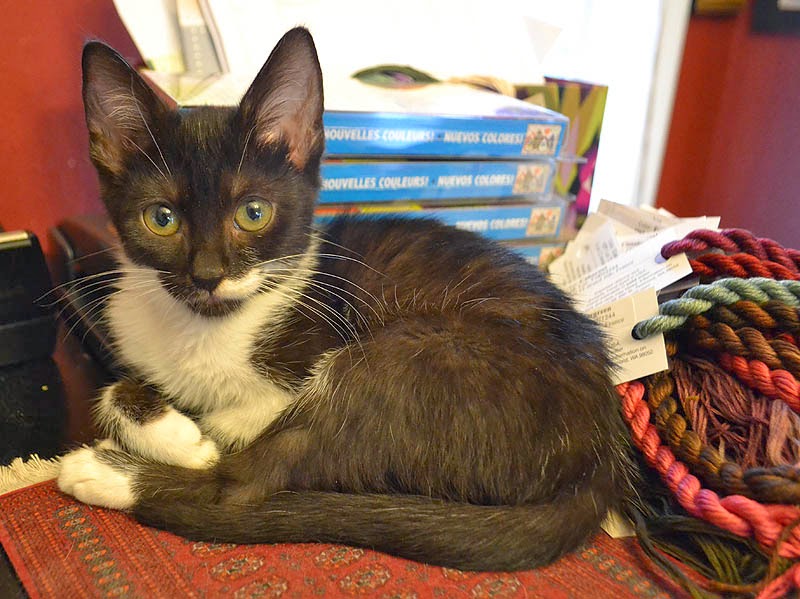 Flossie came to us (already named!) a few weeks ago.  She and 24 other cats were taken out of a hoarding situation, and almost all of them were immediately spayed and neutered.  There were a few small kittens and poor old Flossie.  She was just 1 1/2 pounds, and a little thin and pretty dehydrated like the rest of the cats the shelter took in that day.  She was also too small for surgery and hissy to everyone...well, everyone but me!  I took her home, and we only had her a few short weeks.  In that time, she turned into the sweetest thing, utterly calm, trusting, gentle and quiet.

During my Friday volunteering time at the shelter (when I do adoption counseling), I met a woman and her daughter who were looking for a kitten.  We didn't have any young ones at the time, but I showed her a picture of Flossie.  She said like she felt it was meant to be, and I met them on Saturday with Flossie, who had come up to weight.  They fell head-over-heals for her, and Flossie has been spayed and is now in their tender care.  It was so neat to see her new teenage girl cuddle her, and kiss her gently on the nose (over-and-over).  I know she is in a good home, and I am happy to have been part of the process to get her there. 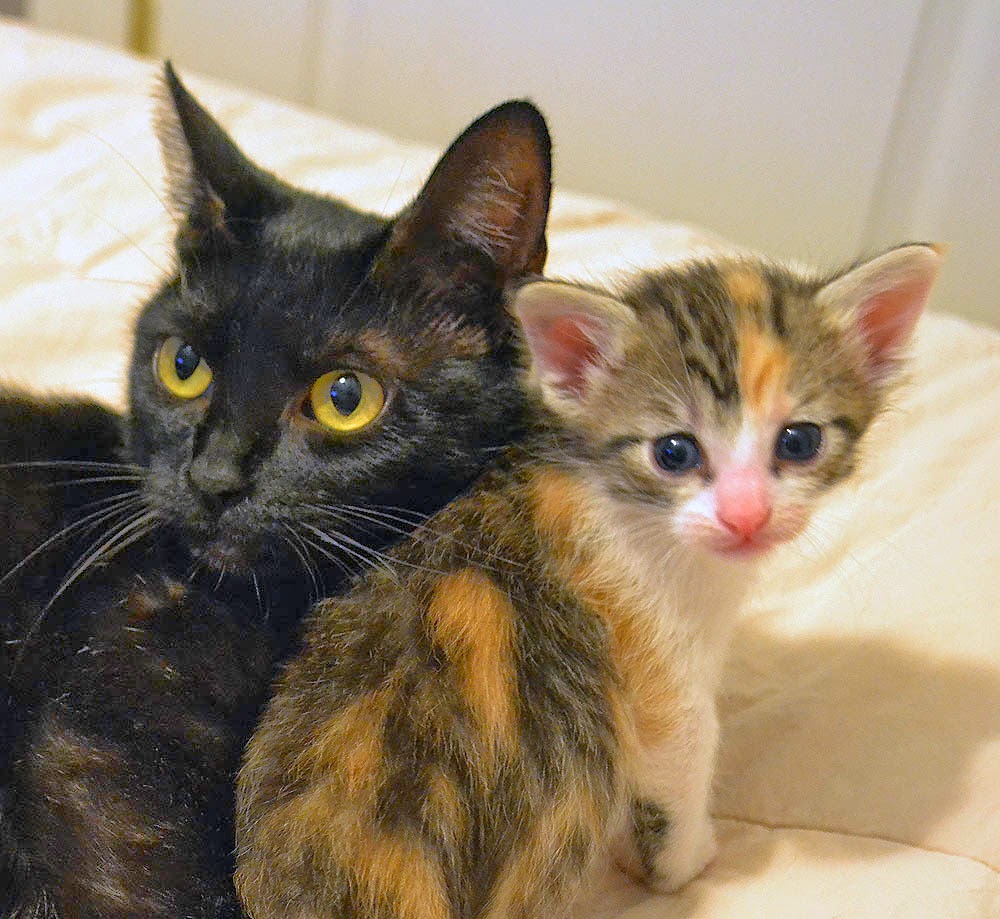 And you may remember about three weeks ago, I took in Trulia and her newborn baby kitten (we took mom and Mercy home the day Mercy was born.)  She was an only child, which is rare.  So the next time I went to the shelter, I looked in Trulia's file.  It seems Trulia, who is less than 2 years old, had just had her SIXTH litter.  Her original owner didn't want her anymore, because "she kept having kittens."  So, all this poor young cat has done since she was probably five months old is be pregnant and take care of kittens.

It made me feel very sad for Trulia -- her growth was stunted (she is a small, 6-pound cat), and her body was so worn out from having kittens, that she could only muster one this time.  Still, she is a devoted mother, fiercely protective of her kitten, and a strict disciplinarian.  I promised her that Mercy would be it.  Then she could go be adopted and live a happy, much easier life. 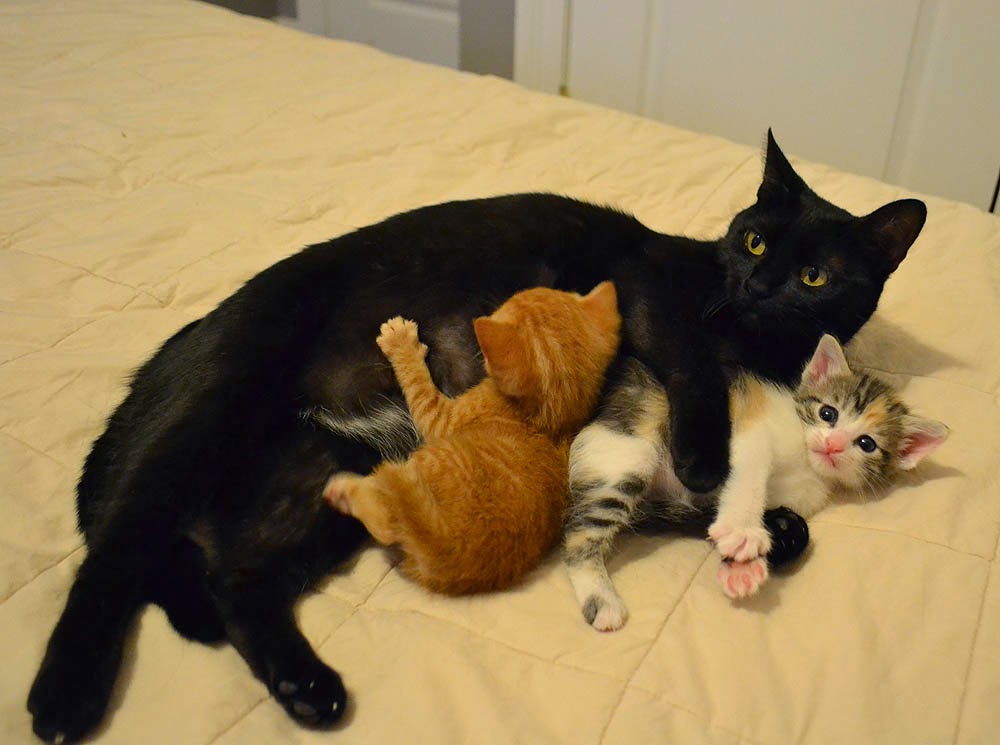 Then along came Little G (short for "Goodness" and "Geoffrey.")  He came into our care as a single, and at three weeks of age still needed to either nurse or be bottle-fed.  Trulia took to him immediately, and she has been caring for two kittens.  Mercy is happy to have the company, and they get along famously, except for when it's time to eat (then they're fighting for space.)  I have been supplementing with a bottle, and both youngsters got their first taste of real food yesterday...and they loved it.  God bless sweet Trulia.  She is amazing. 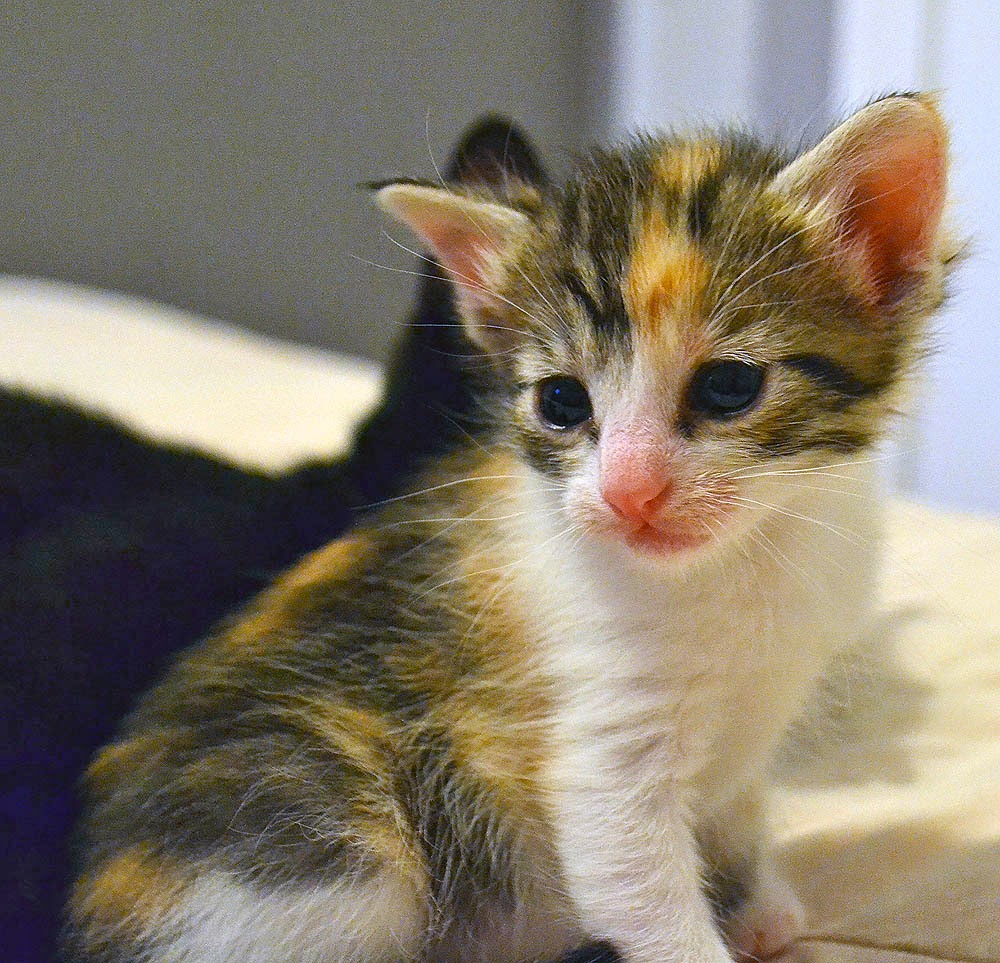 Her daughter, Mercy, is quite a looker.  She has grown quickly, and wobbles around, peeping and exploring.  She likes to be held, and will have longer hair than her mother.  We'll get to hang onto Mercy for another six weeks or so -- Little G may go back to his original foster who was having trouble getting him to eat. 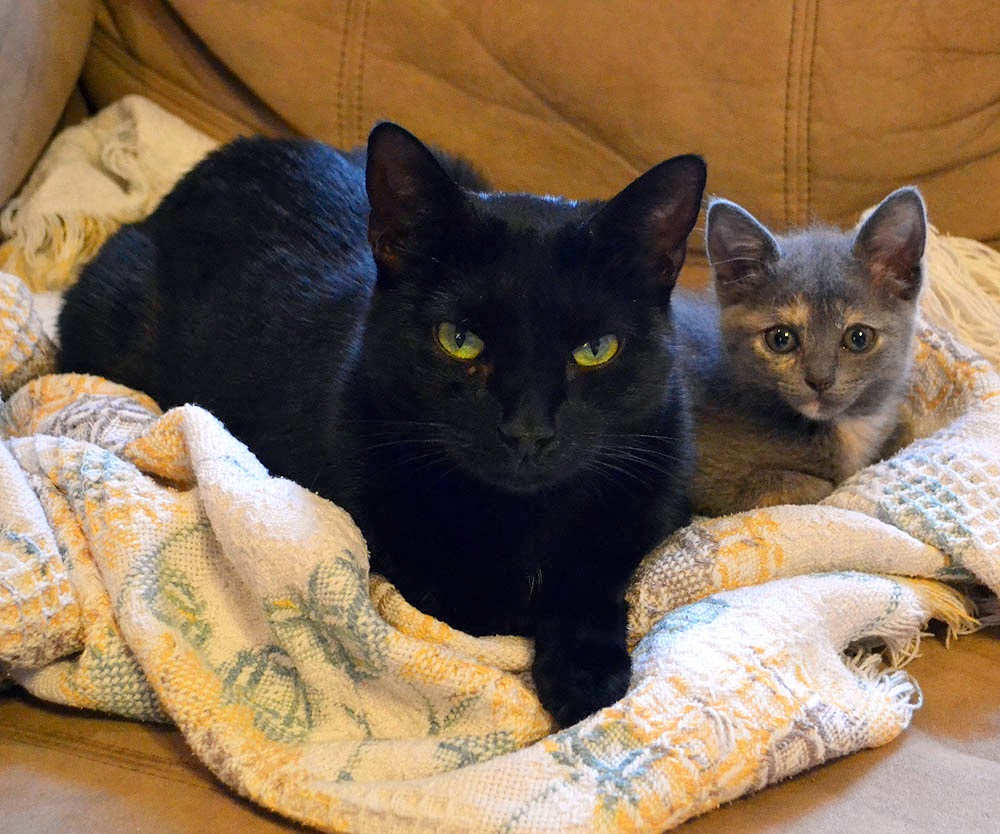 And, I can't leave out Brows.  She has a sad story, too, like pretty much all of the dogs and cats we take in at the shelter.  She came in during an ice storm with six other siblings.  They were newborns, and she is the only one who survived.  Several of the employees tube-fed Brows, which is tricky, and once she was a pound, I took over, and she's been a handful ever since.  She's lively, silly, energetic, crazy, and so, so loving.  I love this picture of her with our cat, Ruby, because Brows almost looks like she's thinking: "Just look innocent, and she'll never know what you did earlier."

Brows will soon go for adoption, and the family who adopted Flossie is meeting her on Thursday to see if they'd like to adopt her, too.  It'd be nice for Brows to go live with her good buddy that she grew up with here (they had a ball together.)  Either way, she'll soon be ready for adoption -- just a few more bouncy, crazy days.

I hope your days are filled with happy moments just like mine are!