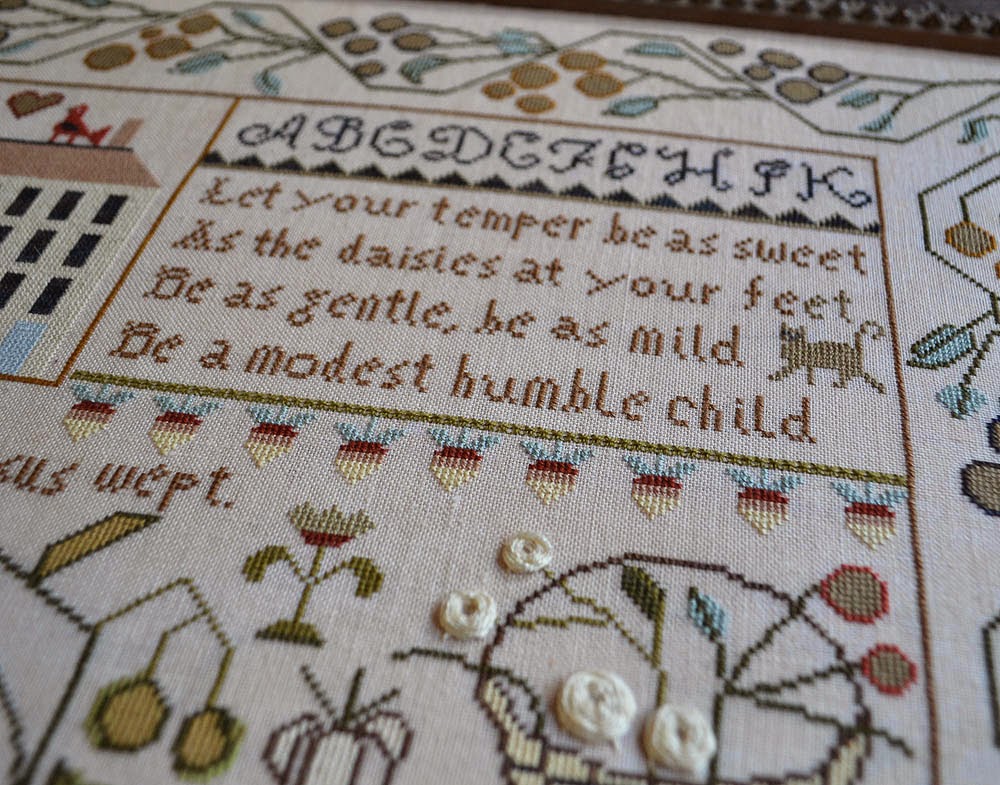 The kittens are all so adorable - how can you bear for any of them to leave? Love your new design - I am checking out your Etsy shop right now!

Oh, Boo! I just checked out your Etsy shop and you only ship within the U.S. Such a pity, as I live in Australia!

Love the new sampler-- will have to place my order at my favorite LNS!

I will mail to any country -- anyone who wants this sampler can leave a comment on my Etsy page, and I'll make you a custom listing to ship to your country. :)

So many nice elements to this piece. Beautiful work!

I love your new sampler design.

That new sampler is just beautiful! Those kittens are so adorable, especially Ella. I have 4 adult cats and that would be my limit!

Love the new sampler! Theresa, would you know a good source that carries the silk? Seems all the shops I checked carry a variety of brands but not Au Ver a Soie. I haven't seen a kitten I didn't like. Went to our local shelter with a donation of caned kitten food. It's the best I can do as I am at my limit with 3 two year old boys and my 15 year old cat that's still going strong.

Hmmm, I don't know which is more beautiful, the kittens or the sampler! Just ordered your Cats In the Garden and can't wait to start stitching!

Education is the ability to listen to almost anything without losing your temper or your self-confidence. See the link below for more info.

I read your blog.I thought it was great.. Hope you have a great day. God bless.

I love cats and kittens I have four lol, and it’s probably just because she is in a new environment the best way to introduce a kitten to a new place is to put it in a little room (with food, water and a litter box)
and just let her get the hang of things and later let her investigate your house. And yes when cats get older they normally calm down.
ps. if she’s not neutered or spayed, witch ever one i forget witch ones for females, cats tend to be wild and once she’s old enough you should neuter her that calms them down.
Hope I helped www.catruleone.com

The Le_Meridian Funding Service went above and beyond their requirements to assist me with my loan which i used expand my pharmacy business,They were friendly, professional, and absolute gems to work with.I will recommend  anyone looking for loan to contact. Email..lfdsloans@lemeridianfds.com  Or lfdsloans@outlook.com.WhatsApp ... + 19893943740.