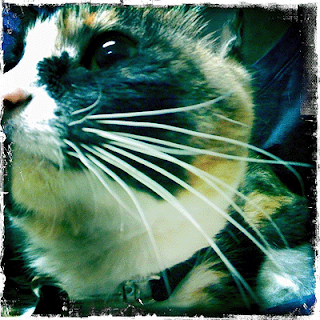 Yesterday we said a very premature farewell to Harrison's cat, Abigail. He adopted her from our local shelter early this year, and she was a beautiful cat. She was, Southern Pines thought, about one year old when she was pulled off the streets, and I'm sure she had some cold months before finding the warmth and security of the shelter of the ... well, shelter.
In August (in fact, the day this picture was taken) I came home from work to find Abigail with two different-sized pupils...one very large, and one small. I rushed her to the vet, who looked her over, did some tests, and sent us home with some medication for a possible eye infection (although neither one of us thought that's what she had.)
Over time, our poor Babs became incontinent, lost her appetite, became constipated, had a few seizures, and eventually had lost so much weight she was becoming weak and wobbly. We took her to the vet again yesterday morning (Steve and I), and he said we had run out of treatments (we had tried a bunch.) Dr. Ricks told us she was on that terrible downward slide toward death, and if we let her, she'd survive until she was just bones and skin. That's not much of a life. We decided there and then for a peaceful end for her. The doctor is convinced she had either a neurological disorder or a brain tumor, uncommon in cats, but not unheard of.
We held her while she became drowsy from the sedative, and the doctor took her from us. She is being buried on a farm near town here. I tell myself that she was lucky to have had time with a family -- the warmth of sunny windows, companionship of other cat friends, good food and table treats, cozy laps and gentle brushings. And while I try to take solace in the ten months or so we had with her...it just doesn't seem like enough.
Posted by Theresa at 12:26 PM

So sorry to hear about Abigail. I'm sure that she was happy with her people family that made her feel safe and warm. *hugs*

So very sad to lose a cat. Thinking of you.

Sorry for your loss. My thoughts are with you and your family.

Teresa, so sorry to read of your loss. It is never easy to tell our 'friends' goodbye. I think you did the right thing, not only adopting her but allowing her the freedom of jumping over that rainbow bridge.

My Grandfather always said that as a responsible pet-owner, that was the "last best decision" to make for a dearly loved friend. She was lucky to have been in your lives and you too were lucky to have enjoyed her for the time you did...far too short though it was.

Thank you for giving Abigail a loving home, however short the time. I'm sure she knew how much you loved her. I know how much you'll miss her, though - so sorry.

So sorry to hear about Abigail. She was a lucky girl to have found such a loving family. I think it's always hard no matter how much time you have with them.

It's so hard to lose a precious pet, especially when they are young and you have to make the decision for them. She, you, and your family were so fortunate to have had time together. So sorry for your loss.

Our pets become like family - they wiggle their way into our heart so very quickly. What a blessing that you had her in your life, though 10 mos. is just too short.

the loss of unconditional love at any age is hard. so sorry for your loss

I'm so sorry, Theresa. We lost our ten-month-old kitten in June. It still breaks my heart. I adored him, and miss him still. *hugs*

Sorry for the lose of your dear kitty.

Sorry for your loss.

Sorry to hear about your cat. Very hard to lose a pet. So very easy to fall in love with them and so very hard to say good-bye.

Ah, T...so sorry to hear about your cat, Abigail. What a difficult decision you had to make, but I trust she's up in cat heaven grateful for the wonderful months she spent with you...hugs to you!

My condolences on your loss. It is always hard to say good bye. She is at peace waiting at the Rainbow Bridge for those who gave her love and comfort in her short life.

Poor sweet kitty. It is so hard to lose our furry companions no matter how long they have been a member of the family.

Bless your heart. How lucky she was to be so loved.

We never do have them long enough, do we? You gave her the absolute best life any one of us -- cat or human -- can have, no matter how long or short. Thank you for sharing her with us. Best wishes for peace in your heart.

Having just lost my dog of 14 years, I can say that it doesn't matter how long these friends have been in our lives - it is still miserable when we have to let them go. I am so sorry for your pain. For Abigail, you made her last days - her best.

Theresa - I'm sorry for your family's loss of your dear companion. I think you made the best decision for her - hard but it's not fair to have them suffering towards a slow demise. Hugs Mel

Theresa--I'm so sorry. Abigail was a beautiful cat, and I'm sure she loved all of you as much as you loved her. Grieve as you must, and then remember all the fun times.

I'm so sorry, T...hugs to your whole family. xoxo

My condolences to you and your family on the loss of Abigail. Always hard to say goodbye to an animal family member.

Theresa, so sorry to read about Abagail. I know only too well the sorrows you are going through. Be sure that Abagail lived a wonderful albeit short time with you and your family. Graycie is sending kitty hugs to you.

I'm so sorry to hear of the loss of your cat. It is such a sad, difficult event when you lose a pet.

I'm so sorry...having 'been there, done that' just recently I know what a sad and difficult time this is for all of you.

You're in my thoughts and prayers.

It is so wonderful that you were with Miss Abigail when she started her walk over the Rainbow Bridge. I had the honor of being with my Coke when he started his journey also.

I hope, that when my time comes, I am as lucky as Coke and Abigail . . that someone who loves me will sit with me as I am starting my journey.

Kind thoughts go out to all of the humans and fur-babies Miss Abigail touched.

That decision is never easy - sorry for your loss! Maybe take comfort that her last months of life were easier than her months before living with you and your family!

I'm so sorry...losing them is always hard, especially when it happens too soon. We had a very similar thing happen with a kitty and my heart goes out to you. I do believe it is a wonderful thing that she had a lifetime worth of love and warmth with you, and that she didn't have to suffer alone on the streets with her condition. Big hugs to you.

My heart goes out to you! You made her life special for the time she had here. And Babs left you with wonderful memories. Sending you hugs!

Oh how sad. I am sorry for your loss. She was a beautiful cat. *hugs*

I'm so very sorry to hear about your cat. Abigail was very lucky to have been chosen by you and your family. I hope you can take solace in memories of what a difference you made in her life.

My heart goes out to Harrison and your family! But what a blessing for Abigail to spend the last part of her life so loved and cared for!

The loss of a pet is always agonizing. I wish you all peace and comfort. When we adopt a pet, we take their life into our hands, and often that means doing the right thing at the right time, like euthanasia. The sweet kitty is at peace now, and you should be, too.