A new sampler and some new kitten pics 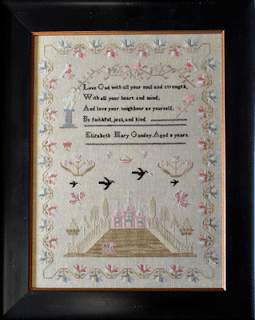 Elizabeth Mary Gandey is back from my model stitcher, and doesn't it look grand? Kathy did a wonderful job in stitching this lovely reproduction. Thank you, Kathy! The piece is stitched on 36 count Vintage Pear by Lakeside Linens in a variety of silks. A conversion to DMC is provided. I think this is a lovely summery-looking sampler with the red, white and blue flowers 'round the border, and lots of grass and green trees. Plus, pink butterflies! (You can click on any of the pictures in my blog to make them larger.)
The verse is: Love God with all your soul and strength,/With all your heart and mind;/And love your neighbor as yourself;/Be faithful, just and kind./Elizabeth Mary Gandey. Aged 8 years. 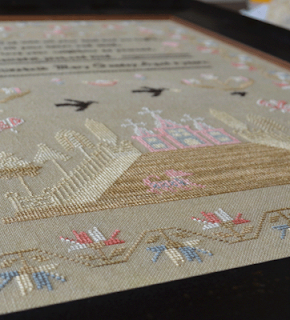 Dear Elizabeth was only 8 years old when she stitched the original sampler in fine wools on linen. She did not date her sampler, but I'd put it in the 1830-1840 range. I purchased the original on eBay UK for around $75.00 about a year and a half ago. Elizabeth would be proud to know that her sampler is going to bring a lot of you some stitching joy. You can order the chart from me now, and my distributors will soon have it, so you can encourage your shops to order it in as well.
I also know a lot of you have been anxious to see our latest kittens we are fostering. I will divulge that I purchased a new toy last weekend -- a Nikon DX3100 camera. I'm still learning to use it, but this should allow me to take much better pictures for my site, blog and graphs.
Here, first, is Chi. She is almost 8 weeks old, which means we will soon have her spayed and put her up for adoption through the shelter. She has grown a lot this last six weeks, and her personality is even cuter than she is. Chi (which means "life energy") loves to cuddle, play, and will let you hold her upside down like a baby to pet her belly. She's smart and sweet, and we will miss her. 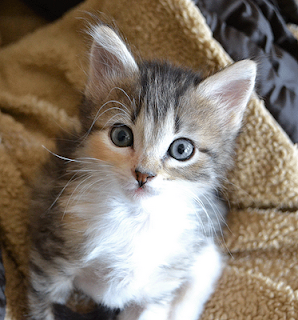 Next is Soba, Chi's brother. He's named for the noodle, which is an inexpensive fast-food typically eaten in Japan. He's so small, but thinks he's very big. Huge personality -- social, confident, talkative. Everyone is moaning and groaning that he will soon be gone, too. He's got a special place in our hearts. 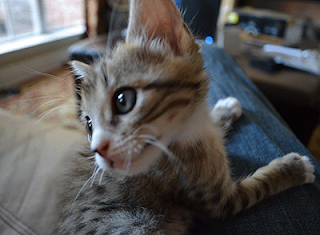 Below is Dot. A local professor found her in his backyard four weeks ago with three other kittens, two of which did not survive. He put the call out on our shelter's Facebook page, and I begged and pleaded for the shelter to let me raise them to get them ready for adoption (they were euthanizing all kittens at that time, since we had too, too many). I got the go ahead (it pays to have some strings to pull.) And Dottie is such a dear heart. SO quiet, so soft, so beautiful. She will make a wonderful lap cat for someone who likes to brush long, lovely hair. Dot's sister, Consuela, died last week after a stroke or seizure. 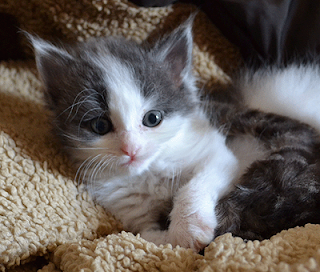 And last is little Elvis. Elvis' brother Cash died the first week we had the kittens (my friend Jennifer was helping watch the little ones at the time.) We believe he had some kind of genetic defect, but at least he was loved, and was warm with a full belly when he passed. Elvis is tiny -- he was in bad shape when he was found, and had probably been abandoned by his mother. (We believe Dot and Consuela were one litter...Elvis and Cash were another.) Elvis is the typical little brother around the house -- always following the big kids, and getting picked on a little. Still, he loves to wrestle, and is turning out to be very handsome. He loves affection and a warm bottle. 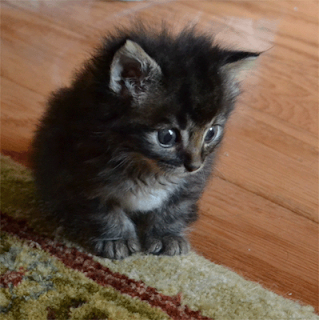 I hope summer is treating you right so far. It's 100 in Hattiesburg this week, and will be ... oh, until October, I imagine. But the peach man has set up his stand on my route home, so life is good.
(P.S. For those of you BREATHING DOWN MY NECK about the Ann Dale reproduction, it will be released this fall. Good things are worth waiting for, and great things take time! Wish me luck!)
Posted by Theresa at 8:45 AM

You did a beautiful job redesigning the sampler - it's so lovely. Thanks for keeping the old things new!

Beautiful Sampler! Love all the kittens!

Lovely sampler and gorgeous kittens. They are so lucky to have you to care for them - even on a temporary basis.

The kittens are adorable; what a nice thing you're doing. Elizabeth Gandey is a great sampler! Thanks for letting us know about Ann--I'm pleased to be able to imagine purchasing her this fall. You know though, that designers who taunt their readers with photos of samplers like Ann Dale are just asking to have their necks breathed down!

Elizabeth looks gorgeous! Great job. Oh my, those kittens are too cute for words!

I think you need a huge reward for caring for all of these kittens. I am sure it breaks your heart when they leave you. You are doing GREAT work!

Beautiful sampler and oh my...what can I say about those adorable kittens? How can you give them up when it's time? My usually anti-pet heart is melting!

Elizabeth is beautiful, but Chi, Soba, Dot, and Elvis, stole my heart. This epidemic of abandoned helpless kittens and pups is so heartbreaking. Look at those little faces!

Thanks for the update on the kitties. We have talked about getting more in the future once my dear GD moves out with her mom. Until that time, we are cat-less, a state that is very odd for us. (We think is is not fair to bring a new kitty (or 2) into the house with a toddler.)

You and your family are very good to do this for the little orphans.

I love to read about all your cute kittens - you understand them so well, and obviously love them very much. Congrats on the new sampler!

I LOVE that sampler and the kitties are cute ;)

Your new sampler is gorgeous! Congratulations.
These little kitties have grabbed my heartstrings! Little Chi looks sooo precious. I would love another cat but my DH has limited me to just the one. He's not really a cat person.

The babies are adorable. I want Elvis!!