The patter of many little feet

"How many kittens do you have at your house right now?" is a question I get regularly from those who know how absolutely crazy I am.  This week?  I'm at eight, which isn't too, too bad.  Here are a few of their stories. 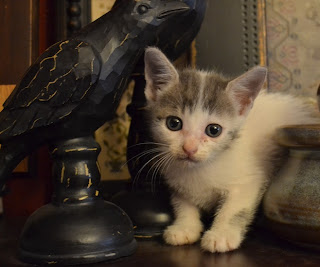 Sunday afternoon, Steve and I went grocery shopping, and on the way home, I asked if we could stop at PetSmart, so I could get a head count on the shelter's cats there (see who had been adopted, and what kind of room I had to fill.)  It was one of those run in/run out kind of things, but in the several minutes we were in the store, a woman came running in with a towel.  We were talking to an employee, and she said to the group of us: "I have a kitten!"

She had found the kitten crying in a holly bush, and she wondered if PetSmart could help her.  They can't take in strays, and of course on Sunday afternoon, the shelter is closed.  We offered to take her in ... her son is very allergic to animals, so she could not have the kitten inside.  But she wondered if we could let her go show her kids the kitten one more time (the kids were waiting in the car out front.)  Of course!

So, we go out to the car, and the two girls (maybe six and three?) are WAILING in the back seat.  They wanted so badly to keep the kitten.  They got to hold her, and I told them all that they can come over in two weeks to see "Holly" the kitten and meet her other kitten friends.  "But we don't know where you live!" the six-year-old said.  I told her I would work it out with her mom.  We exchanged e-mail addresses, so I've been keeping the family updated.  Holly is brave, sassy, funny, and adjusting very well to living in a home.  And she's quite a looker! 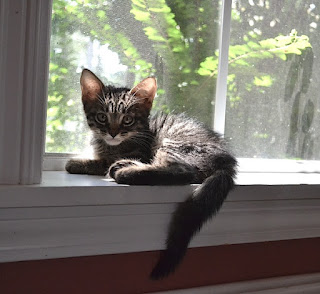 Lex and his three sisters were on the list to be put to sleep last week -- Harrison took two, and I took two.  I've got Lex and Moregan (I don't have a picture of her yet -- she's always a blur and still a little freaked out.)  Lex is, oh my goodness, so, so loving.  What a nice kitten. 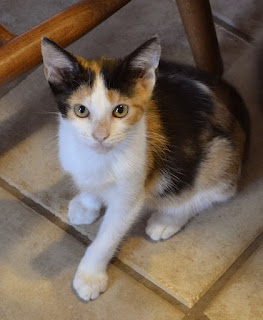 This is Brave -- I blogged about her earlier.  She was also on the "PTS" list -- she was un-handleable, because she was terrified of people (she bit through the leather handling gloves at the shelter.)  She's been with us for a few weeks now, and she is doing much better.  Steve and I can feed her with our fingers, she's sleeping on the end of our bed at night, and she roams the house, looking for affection from our adult cats.  She is still skittish, and although I can catch her and handle her about every other day, she has a ways to go until she feels completely comfortable with that.  She does not bite or scratch.  She will hiss and try to get away, though.  I am trying to find her a patient owner who is willing to let Brave become comfortable and ... well, brave in a new home.  A household with laid-back cats would be awesome.  She was worth saving, and she is very, very dear. 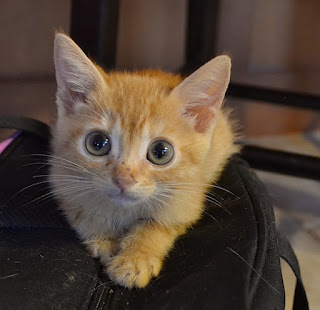 Gumbo is doing much, much better after contracting coccidia and almost dying.  He is such a happy little fellow -- and now he's ROUND (he had gotten to be skin and bones, which was very sad.)  Look at those eyes.  He's been spoken for by a nice woman who will drive here from Texas to pick him up after he is neutered. 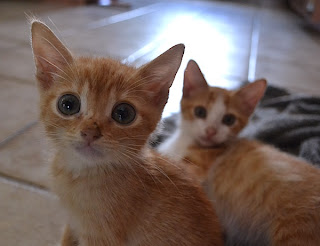 This is another cute picture of Gumbo with his brother Short Stack in the background.  Everyone who sees this kitten says: "Oh my gosh, look at those eyes!" 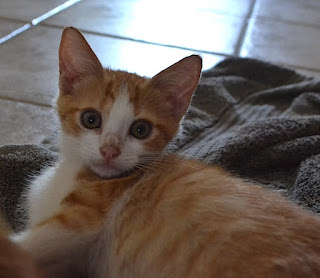 Short Stack went for surgery yesterday and will be going over to PetSmart for adoption.  He's TWICE as big as his brother Gumbo.  He only has half a tail, but he's got a great personality and such a pretty white bib. 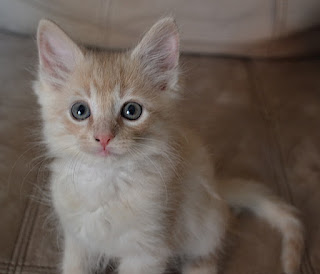 Oslo is one of those kittens that is too cute to be real.  His fur is fine and very soft.  His coloring is so nice -- a pale peachy orange.  He loves people and is going to make someone a very nice cat.  He would have been put to sleep if we hadn't taken him (and his siblings) in.  They were too small to be at the shelter. 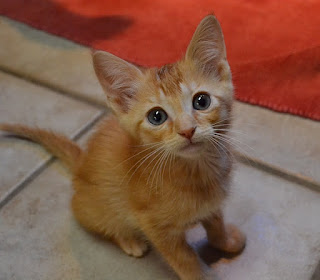 This is Dublin, and he loves me.  I wake up in the night and find him sitting on my chest with his nose about an inch from mine...just looking at me.  He's very affectionate, loves to be held, and is such a pleasant and happy little guy.  Orange cats are always so nice. 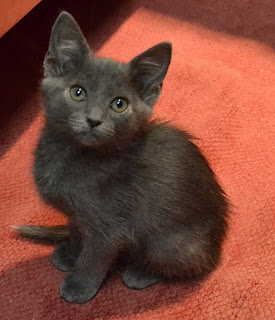 This is Dublin's and Oslo's sister "London."  She is hilarious!  Very sassy -- very chatty -- a little demanding.  She's got a ton of personality and has some really cool Blue Ivory coloring (the lighter patches are mainly on her belly, but you can see a little on her leg in this shot.)  She, too, is social and very happy.  She has so much to say.

The only kittens you didn't get to see are Moregan (she's a light grey tabby) and Sadie (a little black kitten found in the Target parking lot.)  She has been sick this week with coccidia, so we've been doing sub-cutaneous fluids and antibiotics.  She's looking a little thin right now, but is on the rebound.  I'll post pictures of her when she's feeling better.  Sadie is smart, talkative, and very social.  I think someone probably dumped her off in the parking lot, because she adjusted to our house immediately -- using the litter box and then wanting to go sleep on the arm of our couch.

Any of these kittens are available for adoption, and there is a summer special of just $25.00, which includes the cat, spay/neuter surgery, a microchip, and all applicable vaccinations.  There are a number of very good animal transport services in the U.S. to get animals to their new homes for a few hundred dollars.  Please contact me if you're interested at xspeddler@yahoo.com.

what a bunch of cuties!! Loundon looks my Smokie, who is a Russian Blue and 11 yrs old this year. Wish I lived closer. You have a beautiful heart
Audrey
Northern CA

This is Dublin, and he loves me. I wake up in the night and find him sitting on my chest with his nose about an inch from mine...just looking at me.

I always find it happy but sad to hear about your fostered kittens. It's good that you are there for them but it's so sad that people abandon them. They are all so beautiful, I hope they find the homes they deserve.
PS Your advice was helpful and our cat has now accepted our new kitten.

I always think the next batch couldn't possibly be any cuter. HA! Always wrong!

Oh what adorable kittens!!! You are doing a great job at saving some wonderful little furry lives!

What a fine bunch of kitties you have living at your house! Life must be fun with that many underfoot.
I love the little one that sits on your chest and wakes you. Too cute!

Oh, what a great bunch! I would have one if my 15 year old orange tiger "Tigger" wouldn't object. But she is quite used to being the "queen".

PS: Can't wait to see you at Hearts' Desire camp next April!!!

What sweetie pies! I wish my husband and daughter weren't allergic. So glad you rescued them!

oh i wish you'd post more! about what's been happening to them. it's been ages! :)