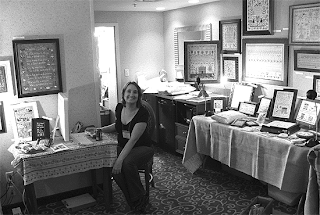 We didn't take many pictures (we were so busy), and then the few I had of me, I look so dreadful and tired. I found this one of my booth, and by making it black and white and stepping it back a bit, I don't look too awful.
I am exhausted! You people have no idea how much work it is getting ready for market, and I am so much more than pleased to do it for you. The previous eight weeks or so have been almost nothing but needlework...designing, stitching, framing, graphing, printing, packing, kitting. And I had eight new designs (between Shakespeare's Peddler and Raise the Roof Designs) and a t-shirt project (see below.) I missed having Sue along with me this time, but Harrison stepped in and stepped up to the challenge, packing orders like a pro. 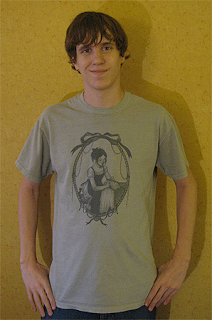 And the cool thing about having Harrison there (see him above in his nifty Jenny Bean T-shirt), was that he got to see first-hand what I do when I go away twice a year. And the distributors and other designers said, "Your mom is so awesome," and "Did you have any idea how hard she works?" and "Your mom is super-talented." It made me feel good, and Harrison was proud enough that when we got back home, I got a big hug.
I just finished updating my web site's Theresa's Basket section with almost 100 new things that I brought back with me. Others are forth-coming. Since I wasn't able to start leaving the booth until later on Saturday, I missed some items that were really popular.
I also have a few other designers who have been invited to join in on the Jenny Bean & Friends club...won't post names until I know for sure, but they all gave me a tentative "yes." Lizzie Kate, SamSarah Designs, Primitive Needle and Chessie & Me all said their Jenny Bean Friends charts did well, and there are other samplers already planned in the series.
I want to give a huge thanks to all of you who attended market...shops, designers, distributors and the like. It's wonderful to see everyone, and the weekend always goes by so quickly. TNNA has asked me to teach at the Nashville show, which ought to be cool. I'm not going to even think about designing stuff for that and my retreats next year until ... oh, gosh, I don't know when. I can't even think straight anymore.
I am not needleworked-out, but I am looking forward to a relaxing weekend at home with a cat on my lap (while I nap? Please, while I nap!)
Posted by Theresa at 1:31 PM

a big thank YOU Theresa for all you do to contribute to our needlework world. I can't wait to peruse the latest basket and see the new things. Hope you get some rest now!

You look wonderful!! I can't wait to look at the "basket!" We appreciate all your hard work!!

I am so glad things went well. I already have Jenny Bean, Spanish Mystery and This Is Christmas in my hands. My mom is starting the Christmas piece. We just love them!

Did you say retreat? Are you planning on doing any? Because I want to come!

I have been asked by a few businesses to do retreats for them...Dyeing to Stitch (Virginia Beach), The Silver Needle (Tulsa, Oklahoma), and Celebrations of Needlework (New Hampshire). These will all be next year -- hope to see some of you there!

Wowzeers! I can imagine you are exhausted!! And I am sure your son is proud - mine would be, but not so much to show it as he's gotta keep a "tough exterior" LOL. Harrison looks quite handsome in his JB t-shirt. Can't wait to see your new stuff and designs once you recover from a whirlwind weekend!

I have just recently discovered your lovely blog and am glad you had success with your designs at market. Could you share the names of the samplers that are on the wall in your booth? Addie

Are you going to have a section that showcases all the Jenny Bean and Friends samplers that everyone is desiging? That would be great if you could! :-)

Theresa;
I knew when I met you back in 2001 you were so very talented and the best was yet to come. Congratulations. Love, love, love you new Jenny Bean Sampler. Can't wait to attend one of your Retreats. Now get some well deserved rest! Great Work!
Jackie

Hi Theresa! Just wanted to let you know that my package was forwarded from Holland - can you believe it?!

I'm off now to check out your basket!!

What a magnificent embroidery!
Bravo to you
Best regards marylin

What a cool guy Harrison is! Love the t-shirt.

Seconding Christine's request for a section about all of Jenny Bean's and her friend's samplers!