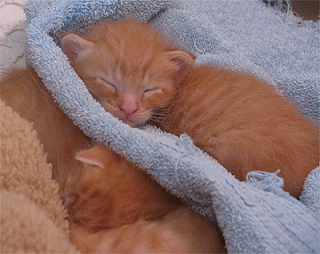 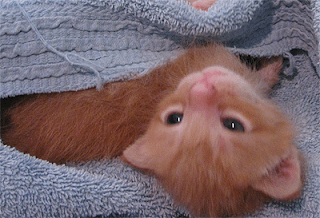 Steve and I brought home three new cats on Friday. They're not ours to keep -- we're just borrowing them until they are weaned from their bottles. Their mother was unable to care for them, and the shelter had tried mixing them into a new litter. Of six. So that poor lady cat was trying to nurse nine kittens. It didn't work.
We have named them Dusty, Lucky and Ned (after the Three Amigos, one of our favorite comedies.) It is a lot of work taking care of baby kittens. Did you know you have to "help" (ahem) them (gulp) pee and poop? Mother cats lick the babies all over, and when their nether regions get licked, it encourages them to void (pee or poo.) So, basically, the boys have learned to do the pottie dance with a paper towel getting rubbed on their bottoms. We sing a little song about it.
They are almost three weeks old and getting their baby teeth. Every time they wake up from a nap, they are a little bit bigger. They're getting around on all fours now (although Steve said they walk like AT-AT's -- those big pachydermic-lookin' ships/tanks/whatever from The Empire Strikes Back.)
It has been interesting seeing the other cats' reactions to the kittens. Kitty doesn't like other cats, generally, so she just walks past and gives a dissatisfied grumble now and then. Boo hissed once, and she just hides now when the babies are getting fed. Ruby and Giblet, still almost kittens themselves, are more curious. Giblet sat by me yesterday while I fed them, keeping one paw on my leg, I guess in quiet support of the cause.
We'll only have them a couple of weeks, but I am hoping our labor helps three different families get twenty years each of love and companionship from these sweet little boys. That's sixty years of happy! Definitely worth some spilled milk and pee on my hands.
Posted by Theresa at 1:27 PM

Oh they are so sweet!! I love orange kitties. I wish I lived closer to you - I would take one in a heartbeat! :)

Awww bless they looks so cute!

They are so cute! I currently have 3 two-week kittens and a momma living in our "kitty condo" on the deck. Enjoy!

OMGosh, they are so cute! Too bad we don't live closer. I've been wanting a little orange tabby kitten. I'd adopt one in a heartbeat!

Theresa, If only Mississipi and Ohio were next door neighbors, our daughter would be over to help you out! We love orange babies. Keep us posted on their continued growth. ~Ann

They are so cute . Having done the whole hand rearing and helping to toilet myself ,it is very rewarding . Enjoy them X

These are sweet, sweet little boys!!!!!!

awww! They are so sweet! I've had kittens living in my house from the day they were born, but thankfully, they had their momma with them to do the dirty work. I miss my little orange baby Semi, and I fully intend to get another orange cat as soon as there is room for a little more love. Of course, with 5 in the house, that is (hopefully) going to be a long time in coming. Thank you, for the work you are doing to help these little guys survive.

Good luck with the fostering, it looks like hard work but very rewarding. What three little beauties.

Oh, they just melt my heart! I love orange kitties! We raised 3 by hand several years ago when mama kitty was hit by a car when babies were 4 days old. It was a very rewarding experience. You are doing a good thing!

What a good mommy kitty you are! I have done fostering a couple of times and there is nothing like the smile on someone's face when then adopt a new kitten. Best wishes and thanks for sharing. Good to know I'm not the only one out there crazy enough to bottle feed kittens.

My heart goes out to those little ones. Bless you Theresa for taking care of them & thanks for sharing their photos.

Oh my, aren't they cute! It's so generous of you to do this - I don't know if I could manage to part with them if I were in your shoes.

They're soooo cute! I know this is a lot of work but I'm sure it's very rewarding for you. I would love to try this someday but I'm afraid I'd want to keep them all!

Oh, they are SO cute!! I love kittens! Good luck!

Oh my! I have fond memories of raising animal orphans. My Dad is a retired vet and we were charged with raising orphans when we were young. We had to feed them EVERY 2hours, take them to school with us, help them potty, etc, etc. It was one of many tasks and one of the better ones!

You have taken on a mighty fine assignment and I admire you for it. You will be surprised how throughly bonded you are with them by the time you are supposed to let them go.

Go luck with everything!

I am a totally failed foster parent. We got two boys when they were 15 ounces each. I bonded almost immediately and loved watching them grow up. Our huge male cat adopted them and raised them right. When they fight, they lick each other rather than biting each other. Love the little beasties.

We have two female rescue cats - very fluffy and cute and getting more relaxed with us. They are on my blog if you want to see them..characters both of them. These kits look adorable - enjoy while you can