I'm a sucker for a cute face and a sad story

So, I go to Southern Pines yesterday to pick up Evita the tortie to take her to PetSmart for adoption.  Just an innocent errand, right?  I chat with Anthony, the shelter's cat man, and we shoot the breeze.  How's this cat?  How's that cat?  Did so-and-so get adopted?  Any new cats coming in?

And he lifts a blanket.  And staring back at me is a very wide-eyed orange cat with NINE squirming kittens trying to nurse.

Four kittens were dropped off at the shelter the other day with no mother.  Miss Orange Feral-Cat just had a new litter of five of her own little orange and black babies, and so Anthony put the orphans in with the new babies.

Nine is a lot, I told Anthony.

Oh, I can take three of them, I said.

So I took three of the four orphans (one was nursing at the moment, so I skipped that one.)  They don't have names yet, I don't know if they're boys or girls.  They are about two weeks old.  But since Miss Isabelle is doing so well nursing Peter, Peep, Jelly Bean and Bunny, I figured I could be nursemaid to these three.

(The kitten I left back at the shelter was off-white like the little one in the above picture.)  The other two are tabbies -- a black one and a brown one.  Of course the littlest one...the off-white one...is the loudest.)

As long as I had the camera out, I thought y'all needed some updated pictures of the Easter bunch -- they are getting big and round.  When I go in to see them and talk to them, they lift their heads to look at me, and are becoming quite social.  I snapped a picture of Bunny first.  She was hard to get on film, because she likes to look around and move all over the place.

Then it was Jelly Bean's turn, but mother Isabelle decided that picture time was over.  "No more cameras, no more cameras.  Jelly Bean has left the building!" 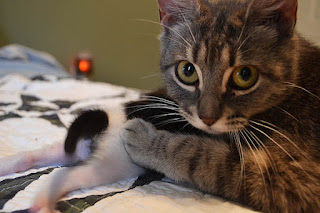 It was Steve's turn to have wide eyes when he saw THREE more little kittens in our house.  But I told him their sad story.  And then he looked at them and saw the little white one and said, "But I might not be able to let them go!"  Of course we will, but in the meantime, we will love them, and name them, and feed them, and clean them.  And our reward is seeing little happy faces like this: 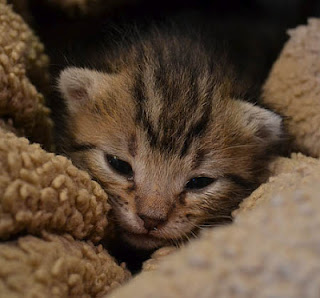 I so admire what you do, caring for furbabies the way you do. I don't think I could ever let them go - I truly would be the crazy cat lady!

You do wonderful work and I love seeing the photos of these lovely little ones. My favourite today is the one with mum in it.

You are an amazing woman with a huge heart. I love you for that!!!

I will vote for you if you run for President.

I get sick when I think of the babies out there that aren't brought in. You certainly have your hands full, but they are filled with soft little creatures that you saved.

OMG, they are adorable! I am a cat lover just like you & have 2 indoor cats. I wish I could do more but it just doesn't work for me. God Bless You for taking in these adorable kitties!

It's a good thing that kittens have angels like you!

That is so sweet, thank god for caring people like you!

You my friend are an amazing person with an amazing family. Thank you for all that you do!

I so look forward to your updates. They give me such a warm fuzzy. As a mom of 7 rescued I don't know how you give them up!

My heart breaks open with each new photo. Thank you for caring for these precious creations!

Lucky babies!
Thank you for the update on Scraps! Love a happy ending!
Angela

They are all so sweet!

I love the beautiful cats ...

That is quite a handful but I know that if I was in the same position I'd say yes too. How can you not?
They're adorable!

Steve is so fricken adorable with those gigantic eyes!! Awwwwwwww