This last weekend was particularly long and sad.  We mourned for a few days over the loss of Violet (see my previous post.)  But we have many kittens to take care of, some are getting ready to leave us, and another group was waiting to be saved....

Right now the shelter is not housing any kittens under six weeks old.  There are too many kittens coming in, and the littlest ones don't do well in the kitten cottage (they quickly become sick.)  A litter of four was slated for euthanasia yesterday, and while a plea went out on the shelter's Facebook page, nobody offered to take them.  In swoops Theresa to save the day!

These poor babies were absolutely covered in fleas -- probably a few dozen per kitten.  We bathed them in magical blue Dawn dishwashing detergent (which gets rid of fleas), gave them some flea spray, and then a dose of a topical flea ointment to keep them off.  These four are some of the NICEST and SWEETEST kittens we have ever taken in.  They are playful, energetic, loving, social, friendly and so, so happy.  We have named them after Beatles songs characters...here are:

Sergeant Pepper.  (He was hard to catch on film, because he was tearing around this morning.) 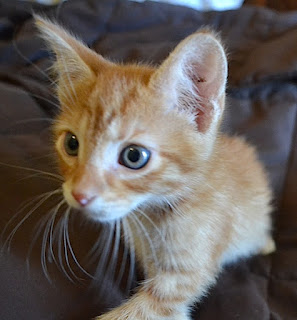 Bungalow Bill.  (He hisses at ALL of the other cats, and he has perpetual poof tail...but he LOVES people.  Maybe he thinks he *is* one?) 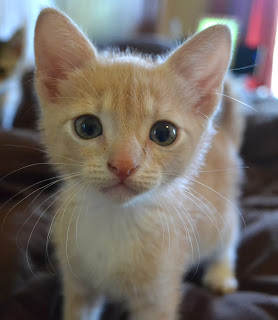 Lucy.  (She has taken a particular shine to Steve last night, who said he "didn't sleep for one minute" last night.) 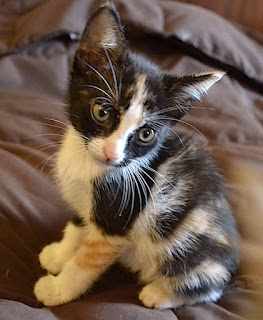 Prudence. (We tell Lucy and Prudence apart, because the orange marking on Prudence's face looks like a "P" and Lucy's looks like a lower case "l.") 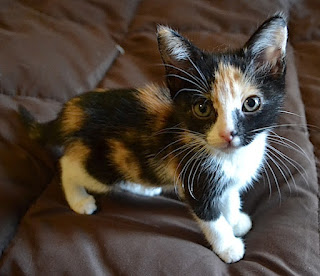 For Father's Day, we went to one of Steve's favorite dude restaurants ... Buffalo Wild Wings.  We joked while there that even the SALADS all have meat.  It's ridiculous.  Then we went home and painted with the painting supplies I received for my birthday.  This is a picture of my painting, inspired by a photograph in a Barefoot Contessa cookbook.  It turned out really cool. 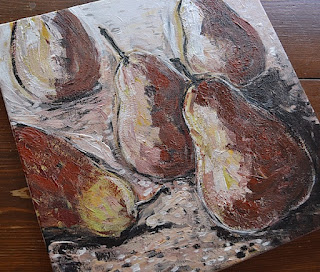 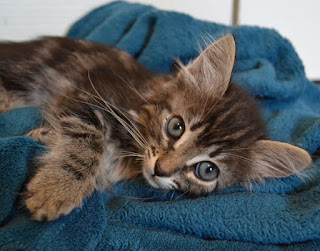 Wednesday, Minty was on the PTS list (Put To Sleep).  She had fleas, ear mites, worms (probably), and a goobery eye.  I scooped up this baby, and Amanda (one of the shelter vet techs) and I cleaned her all up -- gave her dewormer, flea medication, ear mite medication, and then I medicated her eye when I got home.  She was really nervous at our house, but after a few days, she started sleeping out in the open and playing with the other cats.

A nice lady (named Sarah) I had met at the shelter had made plans to come by and see me (and my kittens) to pick one out.  She is going to do her doctoral work at Purdue this fall and wants a cat for a companion.  Well, she came over Saturday afternoon and went home with Minty, who is now named Hattie.  Hattie is now being royally spoiled and is doing well with a lot of one-on-one attention.  Sarah's roommate came along on Saturday and fell in love with little Charlie (Violet's brother.)  The roommate and her fiance are coming over today to look at him and possibly take him home.  LOTS of happy stories, huh?

Oh, and a little more good news.  Kathy the amazing finished stitching the Quaker Ragamuffin Sampler last week, and I should have it in my mailbox today.  She said it turned out beautifully, and I can't wait to see it.  Remember, this one is stitched on 32 ct. Vintage Light Exemplar by Lakeside Linens (you will need a fat half.)  And while I have previously posted the thread list, I didn't have totals.  Here is what you will need in terms of threads:

I will post a picture as soon as I can get a good one.  Hope y'all are having a great week so far.  It's back to work for me, and I am feeling much better this week after losing two dear kittens last week.  Life goes on, and while I will not forget those we have lost, I will keep fighting the good fight.

I'm glad you had some happy stories today to share - your current group of babies are sure cute!

Theresa, I wish I could come and get Prudence. Am thinking about trying the blue Dawn. We have some fleas since my cat Rembrandt stayed at the vet's. Rembrandt can't stop scratching some scabs. I have put the topical flea stuff on her but she rubs it off on objects and I had the vet give her the flea pill. I've noticed two fleas in the house. Do you have any suggestions for how I can get Rembrandt to stop scratching at her scabs so they can heal? I'm so worried about her. Thank you for any help!

Not sure about how to get Rembrandt to quit scratching -- you might ask your vet if it's safe to use an anti-itch cream (like you get over the counter) to give her some relief. Good luck! Fleas are yucky!!!

Ah, Prudence and Lucy, I wish I could take them. They are darling.

I am glad to hear some happier stories from you today. I cannot imagine how helpless and sad you feel when you lose one of your babies due to illness.

St Francis should be your Patron Saint.

Yay! So many cute babies!

The kittens are adorable!

You have a huge heart. Thank you!

ahhh ,gotta love those lil cuties . I could happily take to Bill , he is so sweet. I don't know how you manage to part with any of them.

Your new friends are so adorable!

I'm so glad you have some happy stories today! Those little kittens are SO CUTE! I want to take them all home.

I hope your load is lighter today.

Glad to hear about the littles finding new homes and your newest additions are SO ADORABLE. I can't wait to see the new pattern!

Oh! LOVE all of these sweet babies! Unfortunately right now we have one geriatric cat (16 years old) and 2 dogs. I think the dogs would do fine with a kitten....but I think my old Tigger would be miserable right now with kittens. Someday I will have to say goodbye to her and will sooth my mourning with kittens!!

Oh, Prudence!! Reminds me so much of my mom's cat when she was a kitten...kind of the patchwork calico type too!!

You do such wonderful things for these sweet babies.....thanks.....Trudy

hope the postman got there with that sampler!

You have a wonderful generous heart! I was very sad to learn about Violet and am happy to learn you will continue to help other kitties who need you!

Is always nice to read and hear about their progress and your life with them.

What a sweet bunch of new babies.
Your pear painting is lovely. i hope that you hang it in your kitchen :)

Oh, sweet Violet is gone...I am so sorry to hear that, Theresa! She was certainly a doll to look at...wish I could have met her in person.

Love the happy stories though. You & Steve are so wonderful to do what you do for these sweet little babies. The new kitties are adorable :o)

Theresa, you are an angel. And I must put my 0.02 cents worth about Minty...she's going to be a HOOSIER! Up here in Indiana, just like me :) Pretty cool!

i love Lucy and Prudence so much :-)

What an adorable litter! I'm already smitten with Lucy and Prudence! Life in your home must be so much fun with all these little ones about.
I'm so glad that Minty found a good home too!
Thanks for the tip on Dawn soap. I had no idea it got rid of fleas!