Getting ready for Salty Yarn

No, I'm not going to knit sea water-soaked scarves, I'm heading to the Salty Yarns retreat in Ocean City, Maryland, this weekend to teach a class to 54 stitchers.  I'm excited to see a new part of the country and get some more quality time with stitchers.

It's always difficult to come up with a class idea that isn't just the same old thing...I find a lot of these stitchers at retreats have been to a lot of them.  The class I'm teaching is "Passport Pincushion," which is more of a technique class than a specific design.  Students will get to make the pincushion base, then use scraps of lace, paper, needlework, specialty stitches and pieces of quilting fabric to make the pincushion truly unique.  This was fun to do, and I'm hoping everyone has fun thinking outside the box. 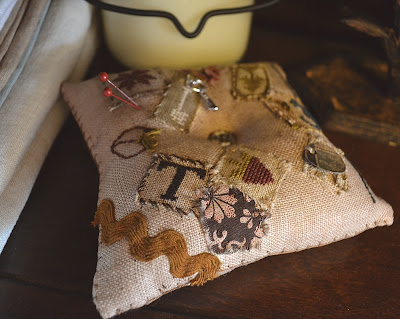 Also, we have had some graduations at our house recently, so I wanted to share a few pictures with you.

The above photo was taken by one of our animal photographer/volunteers at the shelter.  They do a wonderful job capturing the personality of our shelter animals.  This is Chewbacca.  We've had him since he was little bitty, and he is going for surgery soon, so he can go to PetSmart.  It seemed like it took forever for him to grow, and his brother (below) was no better.  They're both sweet dudes, and I will miss him. 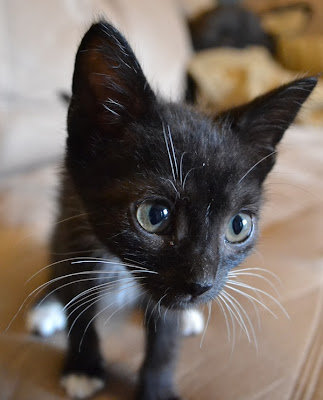 Han Solo is still at our house.  HE LOVES ME.  LIKE CRAZY.  He's a really affectionate little guy, and I'm hoping he will go to a house with a woman for him to love on.  I took him back to the shelter with Chewbacca, but Han INSTANTLY became sick with a runny eye.  And of course, I got him home, and it cleared up.  I think he was faking it.  So, I'm keeping him, will schedule his surgery, and take him myself.  It's just too stressful for him to be away from his mom, I guess. 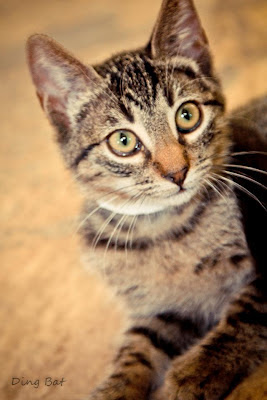 We did not name Ding Bat.  We called him "D.B.," because we felt it was much kinder.  He was a more difficult kitten to get close to...very independent, and he really didn't like me, because he had conjunctivitis and HATED taking his medication.  He really associated me with the unpleasantness of eye drops, but I was happy to take care of him.  He is also on the surgery schedule for this week.  He's going to be huge, and I hope he finds great happiness.  D.B.'s sister, Zephyr, went back, too, and I have posted pictures of her before.  Another striped sweetie. 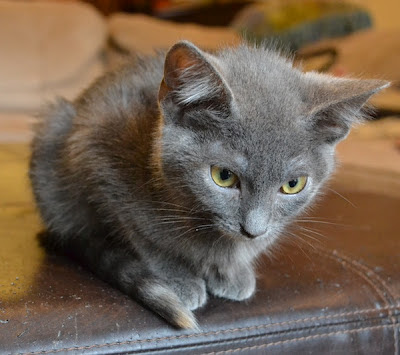 London was a boomerang kitten.  We took her and her brothers in during the Olympics (they were Oslo and Dublin, long since adopted.)  London was a little sickly, got better, went to the shelter, was there for a few weeks with no luck, got sick again, and came back home with us.  She is much better now, and I'm getting her on the schedule, too.  She's really a nice little lady -- very affectionate and good with other cats.  She was tempestuous when she was smaller, but she mellowed, and is now quite gentle.  I know when I take her to PetSmart, she'll be adopted quickly.  She's really beautiful. 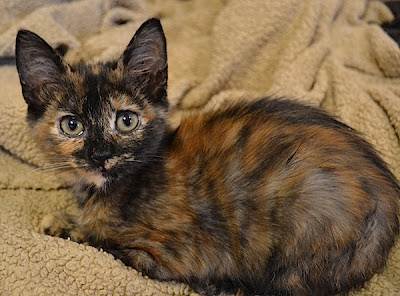 Lyra wasn't with us very long -- she was just a little bit too small to be at at the shelter.  She needed time to grow.  My kids moaned about having to give her up.  Oh boy, is she sweet.  Very gentle, loving, quiet and calm.  And look at that coat.  She's a gorgeous little lady, and I have no doubt she'll be snapped up quickly. 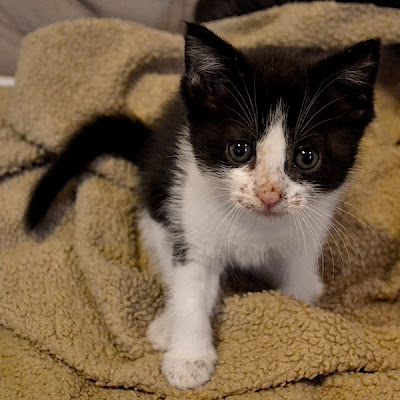 Swizzle was a kitten with a sad story -- she was found covered in fire ants.  Have you ever been bitten by a fire ant?  It's awful.  The bites are very painful, turn into tiny blisters, and burn and itch for a long time.  You can see all of the bites on her nose, but there are also bites on her ears, her head, her back, her tail, and sadly, about a DOZEN on the BOTTOM of each tiny foot.  One of the employees at the shelter saved her from euthanasia, but couldn't care for her immediately.  She needed me to keep her for about ten days.  So, I got some burn cream and pain killer from my veterinarian, and helped her through that tough first few days.  The bites are healing, but she still has a ways to go.  Jennifer was glad to get her back, and will take good care of Swizzle until she's big enough (and well enough) for surgery.

So, our numbers at home are waning.  I've got Leia and Twee, Han Solo and... 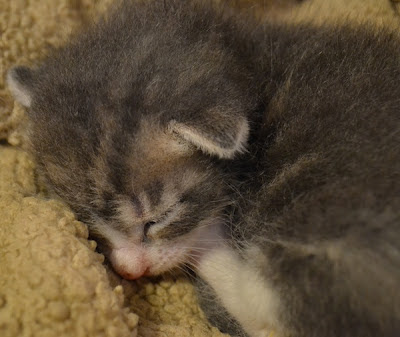 Super Cat.  He's doing well this week, especially after visiting the vet.  He had some tummy troubles and has been teething, so he and I both had a fussy weekend (I was sick with a virus).  He's on probiotics now, and he's already feeling much better.  He'll grow quickly, but we'll have him for probably two more months.  He weighs seven ounces now, but he's growing a little every day.

I'll be out of the office Thursday-Monday for the retreat.  Wish me luck!
Posted by Theresa at 11:25 AM

I'm looking forward to meeting you this weekend and seeing your project.

Look at all those graduates!! They are all so darn cute. Wish I was going to be in Ocean City for the retreat, we vacationed there many weekends when I was growing up. The family back home still goes. Enjoy! You will have a blast and be a hit.

I was at Salty Yarns this past weekend. You will love it! It's a wonderful place.

Have lots of fun, I am sure they will love you and your project for them.
You are coming or way in April, Heart's Desire-Wichita, KS. Our camp is at Rock Springs...it is secluded, but very nice.
Love hearing about the kitties, thanks for all you do.
Judy in Kansas

Thanks for all the pictures of the kitties. Hope you have a great time in Ocean City! Hope you enjoyed your sangria in St. Charles...I'm the customer who brought it to you from Silver Needle!

I was so upset about the prior post I couldn't comment! Loved this one, seeing all the babies. They sure do come in every marking available!