I call my crew "gatos," which is Spanish for "cats." I walk in the door at the end of the day, and I say: "Hey, Gatos!" They all come running. Then they want food. Thought I'd share a few updated pictures for those of you who are interested. 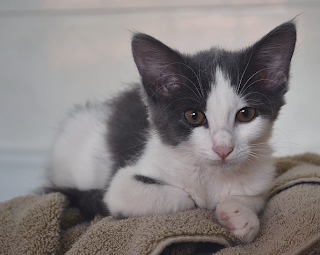 This is my Dottie. She had her surgery last week and will soon be going to PetSmart for adoption. She is my baby girl -- since I bottle-fed her starting at about one week old, I am basically her mommy. I'm hoping she'll find a home where someone loves her as much as I do. She's very sweet and smart. 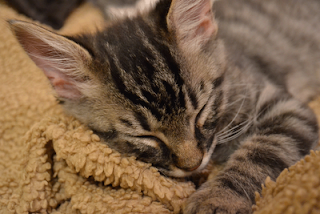 Elvis came over for a play date last week (the night before surgery). He is having a great time at my friend Jennifer's house with his new buddy Lizzy, who was adopted by Jennifer last year (Lizzy is a really nice Calico.) I hear he's been climbing the curtains and making a mess of Jennifer's stitching projects. He's getting big! When he was at my house, he found his old favorite blanket that he used to curl up in (and suck on) when he was just a tiny thing. And of course, finding that blanket made him think it was a good time for a nap.

This is Mufasa. He's just been at our house a couple of days. He's calm and kind of stately, for a kitten. He didn't mind posing for a picture, but I had a much harder time getting a picture of Simba (below). Simba wanted to just run around (all of my pictures of him looked like someone threw a fuzzy orange earmuff in front of the camera.)

Finally, Simba decided it was time for a drink, so I was able to snap a few pictures of him when he was finished. Simba and Mufasa were the only two spared from their litter of four. They're going to hang out with us until they weigh two pounds and can have their surgery. Don't you think I'm so lucky getting to have so many friends?
Posted by Theresa at 9:21 AM

Theresa, If only Ohio wasn't so far from Mississipi we'd help you out with those orange babies - if they are going to be adopted out too. We LOVE orange cats at this house, we'd even keep calling them gatos! ~Ann

These kitties are so precious. I can't believe how regal Mufasa looks in his pose! Kittens are so cute...I miss my kitty, Sagebrush, she was 17 when she died...I give you a lot of credit, Theresa, I wouldn't be able to love and hug on them and then send them somewhere else to live, even knowing they would receive all the love in the world.

Nicholas thinks I need to block your blog. The two newest babies are so cute. Nicholas's other comment: Don't get any bright ideas. We can't have any more kittens.

Oh they are all so lovely - I love when you post pictures of the kitties. They look so sweet and gentle.

Those are the cutest kittens!! Wish I could get one but we already have 5 cats and my hubby thinks that is more than enough!

I so wish you were closer!! They would all hace a loving home here in VA. Bless you for helping them.
(millstonemercantile)

Thank you for sharing your pictures of your kitties. I will check our PetSmart shop here to see if they have any new kittens that need a home.

What cuties they are!

Such sweet kittens!! I know you are enjoying them!

I love your pictures of your foster babies. I foster older cats since I am too susceptible to kittens....the hardest part is saying good bye but then I get to foster another kitty. Take care.

I don't know how you do it!! I would have to keep them all! Then I would the Stitching & Cat lady!! lol My baby kitty of 19 years passed away 2 years ago. She was a fluffy gray calico. I miss her so much. I also have a 15 year old Black cocker spaniel. She has to have all the loving now... The kittys are so cute!!

They are all TOOOOOO cute. I love seeing your fluffy updates. My odd work hours wouldn't suit having baby anythings at my house right now, so I really appreciate living vicariously through your blog.
I can imagine the hours spent just watching kittens play, sleep and eat, but I can't imagine ever giving them up...
Liz x

Oh my, aren't they all so sweet... Thank you so much for sharing your kitten pics, Theresa, I really enjoy them a lot.

Love, love....samplers & kittens. Already have five...if only I could adopt them all. Dottie looks so grown up. How is Zero?
Angie

Oh my goodness....I am in LOVE with Simba and Mufasa...both are just gorgeous and I'm a sucker for cats in general, but make them orange and blue eyed and well...I'm a sucker....and if not for my tyrant of a husband, I would be a sad, sorry, cat lady.
:) Instead I'm just a happy owner of 4 kids and two cats :)