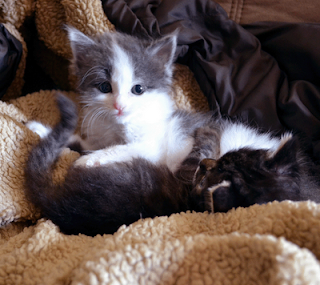 (above: Dottie and Elvis at a few weeks)
A few months ago, my friend Jennifer and I went to the E-Vet to pick up four little kittens in a box lined with a ragged towel. A nice professor had found two separate litters of two in his back yard -- Elvis and Cash were both tiny, cold and dehydrated; Dottie and Consuela were plump, clean and fuzzy. "Oh, they're little," Jennifer said as we looked into the box. We had been told they were about two to three weeks old, but clearly, they were about a week, their eyes having just opened. Any kittens taken to the shelter at that time were being euthanized, due to overwhelming "surrenders." Because we by-passed the shelter and took in these four kittens, we saved their lives.
After getting the "all-clear" from the clinic, Jennifer took home Cash, Consuela and Elvis for a week, and although she was originally drawn to Dottie, she left Dottie with me while I prepared another litter for adoption. Cash died that first week -- we think he had a genetic abnormality. And when my Amigos were gone (Lucky, Dusty and Ned were all adopted), I took Elvis and Consuela in. They all had to be bottle fed, and sometimes I was up in the middle of the night, awakened by tiny peeps and squeaks... "We're hungry, we're hungry." It's hard as a middle-aged woman to get up at 2 a.m., but seeing those sweet furry little faces made it easier.
Consuela had a stroke (or other brain event) at about five weeks, and although she survived it, she was paralyzed, and we had to have our emergency vet put her down. Elvis and Dottie were like siblings, the only two left from the professor's back yard. Elvis has since been adopted by Jennifer and her family, and is enjoying life with two big (cat) sisters, lots of food, curtains to climb, and needlework to get into.
And now Dottie is big. She's had her surgery, her shots, her microchip implant. She's well past the stage where she needs "special" care like bottle feeding. When I come home at the end of the day, she comes running down the hall to greet me and rub on my legs. And when I'm sitting stitching or working on the computer, she's on my lap, purring while she sleeps. She burrows her way into my hair at night, keeping warm while I dream. And if I'm cooking, she'll come stand by me, periodically looking up to tell me something or to ask for a little attention.
I have struggled mightily with the idea of letting her go. I really like her. I love her, in fact. It's not unusual. I like all of the cats we foster, and could have easily kept any of them. They've all been wonderful. Why, I've been wondering, do I sit and look at her and consider keeping her? Why do I try picturing her as a grown cat on my lap?
"I have four cats already," I've been telling people. "I can't keep every seventh or eighth cat we foster."
I want to. I'm bonded to her. And the more I thought about it last week, I finally realized what it was. Basically, to her, I'm her mother. She came to live with us just after her eyes had opened, and I fed her warm bottles. I cleaned her when she was messy. I cuddled her and played with her. The care I have given her is part of her. Those things I gave her since her beginning: bottles, that attention and affection, the food, the grooming, the patience, they're all knit into her bones. They're knit into mine.
But she belongs to someone else. It isn't fair to my cats to have to divide their attention from me further. It isn't fair to Dottie, who should be receiving a larger portion of care and affection from an owner. I have to trust the community to bring forth a person who will love her, cuddle her, care for her just as I have...or better. On Thursday, I'll take her to a little cage at the store across the street where passers-by can look at her, consider her, and eventually, someone will take her home. I'm cutting that ribbon that connects my heart to hers. She's ready for her life.
Good-bye, Dottie. You may not remember me in a few years. But I will always remember you.
(Post script: Yesterday I was aided twice by fate. Jennifer was buying groceries yesterday and it turned out her cashier had adopted Soba, another of our foster cats. Judy (his new owner) said he is very loved, spoiled, and happy. And Judy told Jennifer to let me know that if I ever want to check in on Soba, I can go over to Wal-Mart and see if she's on duty. She'll be happy to give me an update.
And the shelter called me to ask if I could take six (yes, six) kittens for one week. They're about four weeks old and have a foster mother who can take them in a week (she's currently on vacation.) If I couldn't take them, they most likely would have been euthanized. Taking those kittens home last night reminded me that there are many more lives to save. I'm willing to get my heart broken a little here and there in order to help others. It's so rewarding.)
Posted by Theresa at 9:17 AM

Thank you again for your gift of live to these helpless babes. If I felt that kind of connection, I would think there is a reason and wouldn't question it. I couldn't let her go, good for you that you can. But she will never forget you. The stray dog I rescued lives nearby. I recently visited after 5 years and she went nuts when she saw me, tried to leave with me, and showed me a face that broke my heart as I walked away. I now think she feels I abandoned her. And she has a wonderful loving home!

I have tears in my eyes thinking about you saying goodbye to Dottie...you're an angel to these kitties!

Theresa, You are such a kind, loving person. I wish I could do what you do, but I would have the same dilema of letting them go. I actually couldn't do it, I wouldn't be able to let them go. Then there's my husband - who goes to Town & Country (farm supply store) here in town that has Humane Society animals in the store. What does he do but text home a photo of an adorable orange baby. Why do you do that? He did it last year and we ended up with Shadow! Not that we'd trade Shadow and I don't regret getting him, but we don't have room for more cats! Gotta love my husband. Thank you again for what you do. ~Ann

Oh how I admire you for being able to do what you do. The little ones you care for are just beautiful but it's so sad that there are so many of them. I have a niece who works with the Humane Society in California and I know I couldn't do what she does.

You are wonderful to raise all these kittens and give them an excellent start in life. Of course you can't keep them all, but I can't help but think that maybe little Dottie was meant to stay with you. Sometimes there is a connection that you just cannot deny! We have six kitties, most of whom were rescued. When we found them we just knew they were meant for us and are thankful every day that they are with us. We do not feel that any of them don't get enough love! Good luck either way, you are so much stronger than I would be!

You're doing a wonderful thing. Thank you!

You made me cry....
I'm going to pray for you and your mission so that people may step up and adopt your little guys and gals.

You are doing a good thing helping those babies! I raised a litter of three many years ago when they were orphaned at 4 days old...I did all that you have done for Dottie and yes we had a mother-child connection. I found homes for two of the three but not for the third, she stayed with me until she died at the age of 16. She always treated me as her special person, sleeping with me, sitting next to me always wanting to be near. It's hard to let them go no matter when.

That is a tear-jerker for sure...I certainly can understand, having fostered for the Shelter myself. I, too, was torn when it was time for them to leave the nest. In fact, I couldn't help but keep the runt. He's now my "other" child and is so spoiled! Thanks for a great piece on the heartbreak and rewards of fostering!

Dottie is going to be a wonderful pet for someone. She is beautiful and will be adopted very quickly. I just know her new family will love her. You have done a wonderful job taking care of her and your attention has made her a wonderful companion (just like all of those other wonderful kitties you have saved).

I admire so much what you are doing for these little furbabies. My heart would be torn and I'm not sure I'd be able to do this.
Dottie is so cute and I know she'll have a loving home soon. She will be a wonderful pet since she was showered with so much love as she grew.

Oh, you've got me so choked up right now! As I read about your struggles, I'm watching the little guy I've temporarily taken in and dreading the day I must give him up as well. It's a good thing you're doing. You know that, but it never hurts to hear it again. Here's to Dottie and her soon-to-be new home!

You have a big heart and I wish I could do that with kitties or puppies...just think how lucky these cats (yes, when they are grown) are to have had you nuture and care for them as their mother and then grow up with a loving, new home! The other possiblity in their lives when you get them is grim, indeed.

You my friend are a very kind person and the little kitties are so very lucky that you are there. Dottie will get a forever home, and becuase she is so well socialized, she will thrive. The six babies you take in this week will be allowed the luxury of love, safety and a full belly as opposed to a short, short life.

Please continue to keep us posted on your kitties AND your designs and reproductions.

I just couldn't do it. I couldn't let them go, and I couldn't take them in knowing I couldn't keep them. I'm tearful just reading your post. You are amazing being able to give them all so much and yet still be able to let them go. I home she finds a beautiful, loving home very very soon.

What a marvelous job you're doing for all these little ones - bless you!

Hi T, I understand you trying to reason but you have a special bond with Dottie....you should keep her.
Hugs...Angie